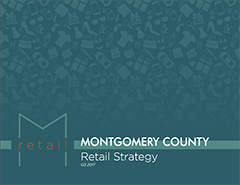 Montgomery County Retail Market Study – Recognizing the importance of retail to the County’s economic competitiveness, as well as its role in creating vibrant commercial areas, a countywide Retail Market Study was prepared by Streetsense, a Bethesda-based retail design and strategy firm. The purpose of the study was to assess the strengths, challenges, and competitive position of retail in the County to develop strategies that will foster successful retail centers and keep them poised for the future.

The retail trends report details recent trends regarding vacancy rates, rents, and net absorption within the County and region.

The Employment monitor report is a periodic summary of employment and unemployment trends in Montgomery County.