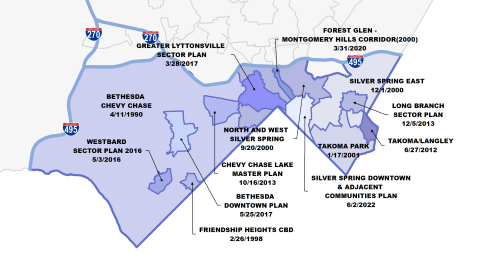 To advance the county’s commitment to racial equity, Montgomery Planning’s Historic Preservation Office, Research and Strategic Projects Division, and Geographic Information Systems (GIS) Team will build a mapping tool that shows historical patterns of segregation in Montgomery County. This is the first phase of a multi-phase project that would result in a collection of geo-referenced information for the purpose of creating a spatial narrative regarding the development of the county. Phase 1, initiated in FY22, is dedicated to conducting land record and plat analysis for all neighborhoods and subdivisions recorded in the Downcounty planning area prior to 1953. Montgomery Planning will use primary source materials to determine which neighborhoods were constructed with or later adopted racial restrictive covenants. These covenants were private contractual agreements that prohibited the sale, rent, lease, or occupation of property to particular groups of people. This research will then be used to create new GIS maps and layers showing the covenants and restrictions at the subdivision level. Further analysis will track the racial and demographic profiles of these areas into the 21st Century.

View the working draft interactive map.
View the December 1, 2022 staff report to the Planning Board and Attachment A of the report.

Various types of legal housing discrimination existed in the United States in the first three-quarters of the 20th Century, each of which contributed to the disproportionately and persistently low rates of homeownership and housing wealth among Black Americans. The legacy of this discrimination is apparent in housing and wealth inequities that persist into the 21st Century.

Montgomery Planning seeks to understand how the private and public sectors channeled racial population growth and influenced the spatial development of Montgomery County in the late nineteenth and twentieth centuries. For the first 20 years after the Civil War, the Black population remained relatively stable and accounted for approximately 36 percent of the county’s population. Montgomery County had 7,434 and 9,685 Black residents in 1870 and 1890, respectively. The number of Black residents, however, stagnated and at times decreased while the white population grew exponentially over the next 70 years. Between 1890 and 1960, the white population increased from 17,500 to 327,736, (+ 1,773 %). In comparison, the Black population increased from 9,685 to 11,527, (+ 19 %). These racial population shifts were not the result of organic growth. Rather, they occurred due to the specific actions of land developers, property owners, real estate boards, and the government who used de jure and de facto segregation to limit opportunities for Black Americans by directing investments into majority white communities, prohibiting Black homeownership in those neighborhoods, and controlling the development of entire communities.

The Mapping Segregation Project will help Montgomery Planning document and explain how the real estate industry, laws, government programs, and other institutionalized and systemic actions led to the inequitable development of Montgomery County. We are part of a national movement of planners, researchers and public historians who are examining this history in our own community, but we are using novel tools and creating spatial maps to share this data.

In the initial phase of the project, Montgomery Planning will explore three different records:

The analysis of racial restrictive covenants will focus on the Downcounty planning area, but research into the HOLC records will be countywide.

Montgomery Planning will sample properties within each subdivision plat near its time of recordation to identify and analyze racial restrictive covenants produced by real estate developers, builders, and owners. Montgomery Planning will analyze at a minimum 2,000 plats recorded in the Downcounty planning area, which will allow the department to document covenants and show trends.

Land records show that the HOLC refinanced hundreds of mortgages for Montgomery County residents. Montgomery Planning will review and analyze each record to determine: 1) the race of the individual who received a loan; 2) the location of each Black-owned refinanced property; 3) the total number of loans provided to Black homeowners; 4) whether the rate of access to said loans was proportionate with Black homeownership; and 5) how access to the HOLC program by Black Montgomery County residents compares to nationwide trends.

Later phases may expand the study of racial restrictive covenants to the entire county and possibly explore systemic actions taken at the local governmental level.