Countywide, corridors are the connective tissue of the county and its communities. Linear geographic areas centered on transportation, including the potential for high-quality bus rapid transit, corridors anchor high-quality transit, significant economic development, and culture. For people who live nearby, existing corridors already play a significant role in day-to-day life, and what happens to a corridor can mean big changes for neighbors. When it comes to equitable future growth, too, new and revitalized corridors are key to our vision for more accessible, connected county.

That’s why a major part of the Thrive Montgomery 2050 growth map is built on corridors. We envision future growth centered around transit stations and along mixed-use corridors that are walkable, bikeable and transit accessible and that connect residents, employees, and visitors to each other and the region. Corridors have existing or planned infrastructure to connect residents to jobs, services, and other destinations in the county and region, and they’re also central to accommodating the County’s future growth in a more efficient and sustainable way. 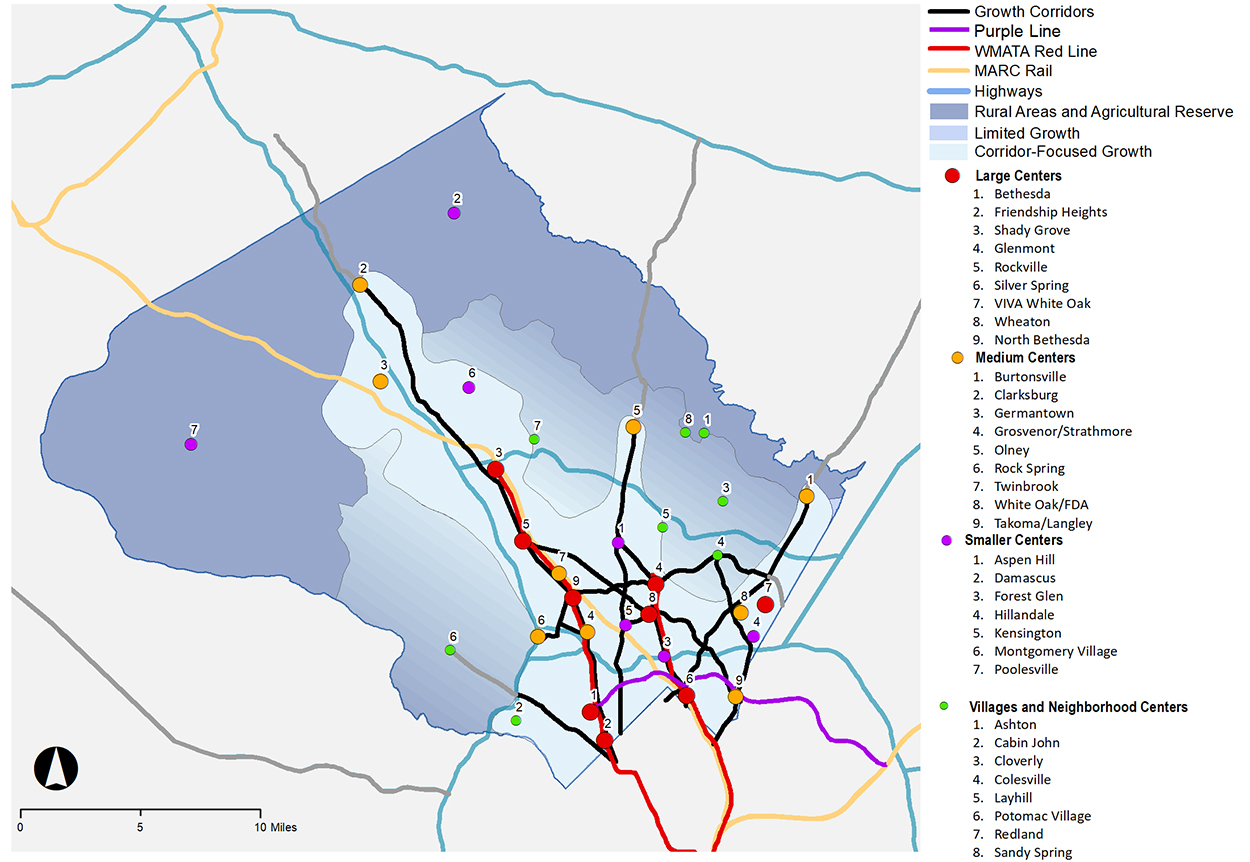 Though central to our future, corridors have actually occupied a significant place in county planning since the 1964 Wedges and Corridors Plan. The 2013 Countywide Transit Corridors Functional Master Plan later enhanced transit opportunities along many corridors to support Montgomery County’s economic development and mobility goals in an environmentally sustainable way. Similarly, other plans have addressed major roadways and the centers along these corridors, such as the Veirs Mill Corridor Master Plan and the White Flint Sector Plan.

Looking ahead, Thrive Montgomery 2050 highlights the importance of several existing and evolving corridors, including Rockville Pike/MD 355, Columbia Pike/US 29, Fairland and Briggs Chaney, and University Boulevard. The University Boulevard Corridor Plan is expected to be one of the first to follow that vision.

As we envision what the future of Montgomery County could look like when we come together to realize an equitable vision that works for all of us, Montgomery Planning anticipates an increasing focus on the county’s corridors and expanding bus rapid transit along them. That direction ensures we can provide better access to wide-ranging destinations while remaining on track with our climate, racial equity, and social justice, and Vision Zero goals.