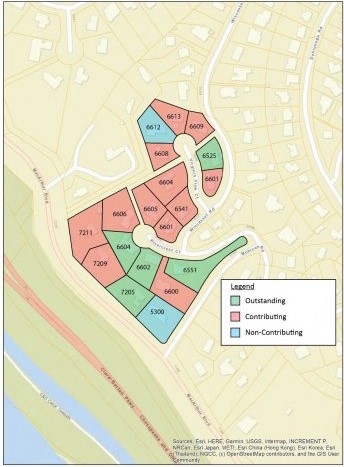 Outstanding, contributing, and non-contributing properties in the historic district.

Potomac Overlook, a celebrated collection of modernist homes built in the late 1950s, has been designated in the county’s Master Plan for Historic Preservation.

In 2008, the Maryland Historical Trust determined the property to be potentially eligible for the National Register of Historic Places under the Multiple Property Documentation Form, “Subdivisions Built by Edmund Bennett and Designed by Keys, Lethbridge & Condon in Montgomery County, Maryland, 1956–1973.”

At the community’s request in 2019, Historic Preservation staff evaluated the district to determine whether it met the designation criteria outlined in §24A-3 of the Montgomery County Code. Local designation offers a higher level of protection than the National Register, requires design review by the Historic Preservation Commission for any major exterior changes, and permits homeowners to apply for local historic preservation tax credits.

The County Council voted to approve the historic district designation on April 19, 2022.

Read the Approved and Adopted:

Potomac Overlook is a significant example of a residential development resulting from the collaboration of merchant builder Edmund J. Bennett and the architecture firm of Keyes, Lethbridge, and Condon (KLC). This development marked the first major subdivision developed by this collaborative partnership in Montgomery County. Bennett and KLC embraced the aesthetic design, functional advantages, and untapped commercial potential for modern architecture in tract housing. The partnership received awards from the American Institute of Architects (AIA) and the National Association of Home Builders (NAHB) for the design of the community in 1961.

In addition, the contributions of several of the first homeowners in Potomac Overlook augment the historic significance of the district. This Amendment recognizes the achievements of six of the first owners who influenced local, state, and national affairs: Pao-Chi and Yu Ming Pien, Dorothy Gilford, Helen Wilson Nies, and Abraham M. and Helen W. Sirkin. Their achievements reflect the following themes: Asian American heritage, Jewish American heritage, women’s history, law, and mathematics, science, and engineering.

At a worksession and public hearing held in June 2021, the Historic Preservation Commission found that the Potomac Overlook Historic District satisfied the designation criteria and voted unanimously to recommend that the Planning Board and that the County Council designate the resource as a Master Plan Historic District. Following the Planning Board’s approval in November 2021, the County Council held a public hearing, a Planning, Housing and Economic Development (PHED) Committee work session, and approved the Amendment in its capacity as the District Council for that portion of the Maryland-Washington Regional District within Montgomery County.

Following the County Council’s approval, The Maryland-National Capital Park and Planning Commission moved to approve the designation in July 2022. With this final approval, the designation officially amends the Master Plan for Historic Preservation in Montgomery County, Maryland (1979), the Bethesda-Chevy Chase Master Plan (1990) and the county’s current General Plan: On Wedges and Corridors for the Physical Development of the Maryland-Washington Regional District in Montgomery and Prince George’s Counties (1964).