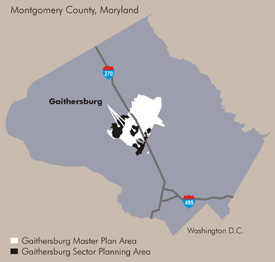 Montgomery Planning is initiating a Minor Master Plan Amendment starting in fall 2020 to evaluate the growth, development and infrastructure investment that has occurred in the Life Sciences Center during the last decade as well as identify strategies to advance progress toward the dynamic live-work community envisioned in the 2010 Plan.

Visit our Life Sciences Center monitoring page to track the status of development staging in the area, including information on the LSC Loop Trail and Biennial Master Plan Monitoring Report.

In June 2011, the Planning Board approved implementation guidelines for GSSC. The guidelines (500 kb) contain procedures for coordinating, staging, and monitoring implementation of recommendations for the Life Sciences Center. As spelled out in the GSSC master plan, the guidelines establish a development staging plan, which times the delivery of infrastructure and amenities with development. Among other things, the plan requires the creation of a biennial monitoring program to track development and staging triggers at each stage of the LSC’s development. The guidelines should be used by developers in the LSC, as well as citizens who want to know what is being planned in their neighborhood.

View the design guidelines (5.3MB) for the Great Seneca Science Corridor Master Plan.
View the June 2010 staff presentation (4.5MB) to the Planning Board

(Meetings held virtually on the last Tuesday of the month at 7 p.m., unless otherwise noted. Review agenda for instructions on how to join the meeting.)