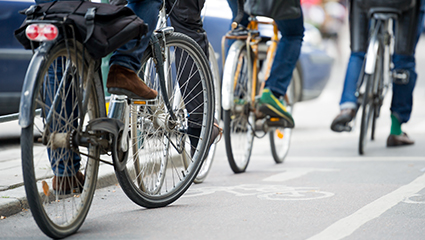 The public is invited on Saturday, October 26 to cycle six miles from Warner Circle Park in Kensington through neighborhoods of Victorian-era houses and historic structures

SILVER SPRING, MD – The Montgomery County Planning Department, part of the Maryland-National Capital Park and Planning Commission, is sponsoring a six-mile bike ride on Saturday, October 26, 2019 that starts at 9 a.m. at Warner Circle Park (10231 Carroll Place, Kensington, MD) and ends at that location around 10:30 a.m. The bike tour aims to highlight the architectural character of the Kensington, Forest Glen, Capitol View Park and National Park Seminary Historic Districts. Most of the loop is a low-stress route, but some sections consist of hilly terrain.

All participants will need to sign a waiver as part of the bike ride.

The group ride includes stops within the following historic districts:

This turn-of-the-last-century garden suburb began as a railroad stop and grew to encompass Victorian residences, curving streets and a vital commercial center. Tour stops will include:

Established in 1887, the Forest Glen subdivision was conceived as “healthy, well located and easily accessible suburban village,” according to a promotional brochure, with a summer hotel and a streetcar line. Tour stops will include:

This railroad community began with a subdivision in 1887. Its name came from the view of the United States Capitol dome from the upper stories of some of the houses. Tour stops will include:

Development in this area began with an 1887 hotel called the Forest Inn that was converted into a boarding school. During World War II, the US Army acquired the site for a convalescent center and in the 1970s, relocated its facility to the Walter Reed campus in Washington, DC. After being abandoned, the seminary was sold by the federal government to a private developer who converted the property into its current residential uses. Tour stops will include:

Staff from the Planning Department’s Historic Preservation Office will be present to discuss the history of the districts and buildings encountered along the bike route.