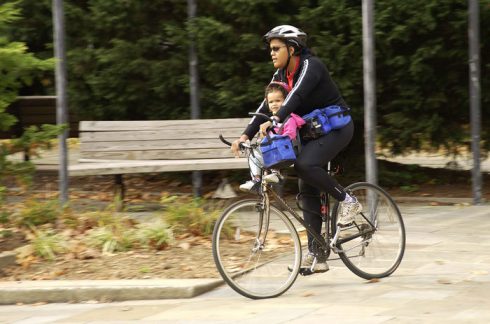 The Bethesda Downtown Sector Plan recommends new bikeways on Woodmont Avenue, Bradley Boulevard, Norfolk Avenue, Arlington Road and several other streets. The goal is to create a comfortable, well connected bicycling network that enables people to get to the places they want to go in and around Bethesda, be it a trip to the store or a weekend ride.

“I am committed to creating the safest environment for cyclists of all ages and all skill levels,” says Council Vice President Riemer. “With the recent closure of the Georgetown Branch Trail, this is an important time for a community discussion about the future of biking infrastructure in the affected areas. The changes recommended in the Bethesda Sector Plan, the Bicycle Master Plan, and the ongoing discussions about alternative routes to the Georgetown Branch Trail all are pushing the County in the right direction. But we need to get it right. That is why I am looking forward to hearing from the public, as the County considers ways to make bicycling a real option for more residents.”

Adds Council President Roger Berliner, “When the Council passed the Downtown Bethesda Plan, we did so with the aim of creating a truly walkable and bikeable community – one that embraces a multimodal approach that encourages people to get out of their cars, reducing congestion and our carbon footprint.  The construction of the Purple Line and the completion of the Capital Crescent Trail has made it clear that we need the bike infrastructure recommended in the Downtown Bethesda Plan more than ever. I look forward to hearing from the County Department of Transportation, the County Planning Department, the Washington Area Bicyclist Association and the community on November 1 as to how we can make our bicycle network the best it can be.”

A community forum was held in January 2017 on the proposed recommendations for bicycling and pedestrian improvements in downtown Bethesda. This event, Walking, Biking and the New Bethesda Sector Plan, was intended for those county residents interested in the Planning Board recommendations for making Downtown Bethesda more accessible to pedestrians and cyclists. The discussion focused on how these proposals for Bethesda are different from current conditions and what it will take to make the changes recommended in the new plan.

The event was co-sponsored by Councilmember Hans Riemer (At-Large) and the Planning Department. It was timed to take place prior to County Council deliberations about the Planning Board-approved draft of the Bethesda Downtown Sector Plan.

Launched in 2014, the new Sector Plan builds on the success of Downtown Bethesda by offering ways to strengthen its centers of activity – Bethesda Row, Wisconsin Avenue corridor, Woodmont Triangle and other established and emerging districts – over the next 20 years. The Sector Plan was approved and adopted by the Council on May 25, 2017, the Bethesda Overlay Zone was approved and adopted in July 2017 and the Sectional Map amendment was approved on September 19, 2017.

Goals of the plan focus on economic, social and environmental sustainability, including:

One of its recommendations of the plan is a high-performance area that will incentivize more energy-efficient buildings, new parks, tree-lined streets and innovative storm water management.

For questions or comments about the Bethesda plan, please email: bethesdadowntownplan@montgomeryplanning.org

Hans Riemer, elected to the County Council in 2010, represents one million Montgomery County residents as an At-Large Member. Hans serves as the Council’s Lead for Digital Government, where he is working to make county government smarter and services more efficient, and he serves on the Planning, Housing, and Economic Development Committee, as well as the Government Operations and Fiscal Policy Committee.

As Chair of the Council’s Transportation, Infrastructure, Energy, and Environment Committee, Councilmember Berliner has led the charge on creating more multi-modal transportation options.  He guided the Council to unanimously support rapid transit; he was the lead sponsor on moving Montgomery County forward in adopting an urban road code bill that will narrow lanes, slow traffic through our urban nodes, and provide for greater bicycle and pedestrian safety. He requested our Planning Board to consider new and innovative traffic tests that will promote multi- modal options rather than only road widening and intersection improvements.