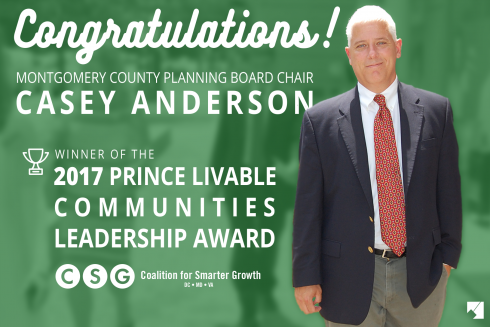 Washington, DC-based regional organization will present Livable Communities Leadership Award to Anderson in May, recognizing his advancement of smart growth in Montgomery County

Silver Spring, MD – The Montgomery County Planning Board, part of the Maryland-National Capital Park and Planning Commission (M-NCPPC), is pleased to announce that Planning Board Chair Casey Anderson is the recipient of the 2017 Prince Livable Communities Leadership Award given by the Coalition for Smarter Growth of Washington, DC. Chair Anderson will be honored on May 17, 2017 at an awards celebration held at National Airport’s historic terminal A.

The Prince Livable Communities Leadership Award is given every year to an individual from the District, Maryland or Virginia for leadership on smart growth, transit and community revitalization. This year marks the 20th anniversary of the award.

“I’m honored to receive this award, both because of my longstanding admiration for the Coalition for Smarter Growth and because it validates the hard work and dedication of our staff and Board,” Anderson says. “I’m proud that we are being recognized for innovation, excellence and community engagement in our efforts to help strengthen Montgomery County’s economic competitiveness, environmental sustainability and quality of life.”

Anderson’s accomplishments while serving on the Montgomery Planning Board include the following:

-Conceived a market-oriented system for allocating development capacity in Downtown Bethesda to raise funds for urban parks, create incentives for construction of affordable housing and raise standards for design excellence.

-Proposed the idea of redeveloping the Apex Building site to facilitate construction of the Purple Line light rail station in downtown Bethesda and provide a new below-grade tunnel connection for the Capital Crescent Trail under Wisconsin Avenue. The proposal ultimately resulted in a minor master plan that in turn led to an ambitious mixed-use project (currently in development) that will incorporate the station and trail tunnel.

-Suggested measuring latent demand for bicycling accommodations to produce a heat map of the county, identifying the best places for investments in bike infrastructure. The Montgomery Planning transportation staff expanded the heat map concept into an award-winning digital Bicycle Stress Map, which identifies places where less experienced cyclists need safer routes if they are going to feel comfortable riding.

-Reoriented the priorities of the Montgomery County Department of Parks to focus on acquisition and programming of urban parks. This shift has resulted in the new Energized Public Spaces Plan, which aims to provide more parks and public spaces that encourage active recreation and social interaction in densely populated areas of the county.

-Encouraged the Parks Department to make better use of data and analytics, including a state-of-the-art assessment of maintenance and usage of athletic fields.

-Helped shape plans for a countywide bus rapid transit network as well as major land use plans for White Oak, Bethesda and White Flint. Recommended studies on the future of the office market, rental housing and retail.

The Montgomery County Council appointed Casey Anderson to the Planning Board in 2011 and selected him to serve as chair in 2014. He also serves as vice chair of the Maryland-National Capital Park and Planning Commission, a bi-county agency established by state law that regulates real estate development, plans transportation infrastructure, and manages the park systems in Montgomery and Prince George’s Counties.

Before assuming his current role, Anderson founded a jury consulting firm after working as a congressional staffer, government relations executive, newspaper reporter and lawyer in private practice. He has served on the boards of several non-profit organizations, including the Washington Area Bicyclist Association, the Citizens League of Montgomery County, the Coalition to Stop Gun Violence and the Committee for Montgomery, the Woodside Civic Association and the Silver Spring Citizens Advisory Board.

Anderson holds undergraduate and law degrees from Georgetown University and a master degree in journalism from Columbia University. He lives in Silver Spring with his wife Mary Bowle and two children. He enjoys mountain biking, coaching competitive high school debate teams and volunteering with the Boy Scouts of America.

About the Coalition for Smarter Growth

The Coalition for Smarter Growth is the leading organization in the Washington DC region dedicated to making the case for smart growth. Its mission is to promote walkable, inclusive and transit-oriented communities, and the land use and transportation policies and investments needed to make those communities flourish. Smart growth combines housing, offices, retail and other services into conveniently walkable neighborhoods with easy access to public transportation for more personal mobility choices, better economic competitiveness and a brighter environmental future. Like the Coalition for Smarter Growth on Facebook at http://www.facebook.com/betterdcregion Follow the organization on Twitter at http://www.twitter.com/betterdcregion