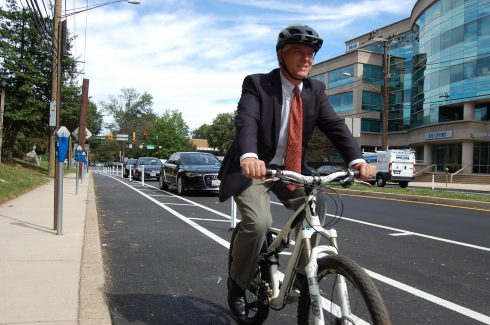 Silver Spring, MD – The Montgomery County Planning Department, part of The Maryland-National Capital Park and Planning Commission (M-NCPPC), is celebrating the opening of the Spring Street separated bike lane in Downtown Silver Spring with a ribbon-cutting ceremony and community bike ride on Saturday, October 14, 2017. The event is the first in a series of community bike rides taking place as a part of the Planning Department’s continued focus on Silver Spring Placemaking pop-up events. These events are free and open to the public.

The event will kick-off at 10 a.m. with a ribbon-cutting ceremony taking place at 10:30 a.m. at Woodside Urban Park, located at 8800 Georgia Avenue (corner of Georgia Avenue and Spring Street), and will be followed by a community bike ride along the Spring Street separated bike lanes. The route will start at Woodside Park and end at the Silver Spring Farmers Market located at 911 Ellsworth Drive in downtown Silver Spring. The ride should take approximately 10 minutes from start to finish.

Register for the October 14 WABA-sponsored event.

The Montgomery County Department of Transportation (MCDOT) constructed the separated bike lanes along Spring and Cedar Streets in downtown Silver Spring. The new bikeway is separated from vehicles by a painted buffer and flexible posts to keep cars from intruding into the bike lanes. In addition to the barriers, parked cars will provide a buffer. The bikeway runs along Spring Street from Second Avenue in the west to Ellsworth Drive and will continue along Cedar Street to Wayne Avenue.

During the October 14 event, representatives from the Montgomery Washington Area Bicyclist Association (WABA), Montgomery Planning’s Bicycle Master Plan team and MCDOT Director, Al Roshdieh will be on-site to discuss the separated bike lane and some of the recommendations in the master plan, which proposes a countywide, low-stress bicycle network.

“The Spring Street separated bike lane is an example of some of the recommendations we will be making in the Bicycle Master Plan,” says project manager, David Anspacher. “We are thrilled that this separated bike lane has been implemented and look forward to working with MCDOT and WABA to keep the momentum going to create a safe and comfortable bicycle network in Montgomery County.”

“We know that when we make biking safer by adding protected bike lanes, more people of all skill levels, young and old, will choose to bike,” said County Council Vice President Hans Riemer. “The Spring Street Protected Bike Lane will be a tremendous asset to the community, and it is just the beginning of a fully-separated bike lane network—known as the Silver Spring Circle—in downtown Silver Spring. I requested that Planning Staff design a Protected Bike Lane Network in Silver Spring and I’d like to commend the County Executive and his administration, and my Council colleagues, for making the Silver Spring Circle a reality.”

The Bicycle Master Plan is scheduled to be presented to the Montgomery County Planning Board in fall 2017.

The 2017 Silver Spring Placemaking series, being held in partnership with County Councilmembers Hans Riemer and Tom Hucker, and the Silver Spring Regional Services Center, implements some of the ideas generated in a series of community workshops held during fall 2014. The goal of these events is to activate existing underutilized and hidden public spaces in downtown Silver Spring, and encourage community interaction.