Earlier this winter, the New York Times ran an article on a CEO’s for Cities study revealing a substantial premium on home sale prices in areas with an above average Walkscore, the informative, if simplistic online measurement tool that ranks neighborhood “walkability” based on proximity to community services and amenities. According to the study, for every additional Walkscore point a neighborhood earns, home prices increase by $700 and $3,000. On average, highly walkable homes sold for $4,000 to $38,000 more than their auto-centric competition.

This past weekend, I attempted to use Walkscore in conjunction with Zillow.com to (at least loosely) confirm the study’s findings for Montgomery County. While zip-code data gave a soft nod in the affirmative, I couldn’t find data fine-grained enough without searching individual listings. I did, however, spend some time seeing how different areas in the County fared on the walkability test.

Not surprisingly, the County’s results range from laudable to loathsome. At the positive end of the spectrum, Bethesda (97), Wheaton (97), and Silver Spring (94), all rank in the top 10% nationwide. They succeed in large part because of their concentration of diverse retail and abundant transportation options. Less exemplary are the Beltway-adjacent areas of Forest Glen (51) and Grosvenor (48) which, despite Metro accessibility, are both physically constrained and poorly served by neighborhood services.

What was most notable about the County is the discontinuity of our walkable fabric. If you own a home three-quarters of a mile west of the Bethesda Metro Station, your Walkscore is probably about 38. Travel the same distance in the opposite direction and you’re likely to earn a score of 55. This trend is pretty consistent throughout the MD-355/Red Line corridor. Worse, though, are the number of pockets in between Metro stations that have diminished Walkscore. This trend suggests that residents and office workers are unlikely to walk to services or use transit without driving to the station (which is still much better than driving to work). Pooks Hill, for example, located just south of the Beltway between the Medical Center and Grosvenor stations barely ekes out a score of 30. As distance between stations increases, this trend becomes increasingly common.

Downtown DC, by contrast, is consistently walkable. According to the CEO for Cities study, DC has a median score 71. A quarter of District neighborhoods score better than 82 on the Walkscore scale, ranking seventh among US cities. Where in Montgomery County the walkable street network extends only a limited distance from Metro, in the District the street network ties together neighborhoods creating a continuous pedestrian environment. As a result, it is just as easy to walk from Adams Morgan to Georgetown where there is no Metro service, as it is to Dupont Circle or Penn Quarter where there is. 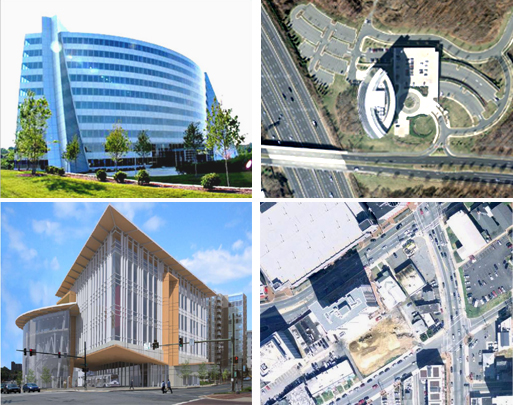 Consider the following buildings in Montgomery County. The first is a LEED-Platinum rated office building just off I-270 with almost non-existent transit service, no proximal services or amenities, and no real concentration of nearby housing. To construct the building, a swath of forest was cleared not only to accommodate the building footprint, but also the parking structure, which incidentally has twice the footprint of the building itself. Its Walkscore is 35.

The second project is the Silver Spring Library, which is scheduled break ground on a site that will eventually serve as a station for the Purple Line light rail system. The library building accommodates ground floor retail, an arts center, additional office space, and a 60,000 square foot library. It sits on a previously developed site, requires no additional parking, will eventually also accommodate 140 residential units, and is located adjacent to the Silver Spring CBD. Its walkscore is 97. The library, however, is projected to only earn a LEED-Silver rating.

According to one study, 30% more energy is expended by workers commuting to a traditional office building than the building itself uses. For an average office building built to modern energy codes, more than twice as much energy is used by commuters than by the building itself. This highlights the importance of building within a walkable framework. You can argue that a “green” auto-dependence is better than the traditional form of auto-dependence, and in the case of Tower Oaks, attractive auto-dependence is better than your run-of-the-mill schlock. But this misses the point. Ultimately, sustainability comes back to a few basic principles. Walkability, and automobile independence, is one.

5 Responses to “What Walkscore Reveals about Montgomery County”