On April 24, the Prince George’s County Council passed a law that requires developers to make improvements for pedestrians and bicyclists to ensure adequate public pedestrian and bikeway facilities in County Centers and Corridors.

The Washington Post article, “Prince George’s Backs Plan to ease the way of pedestrians and cyclists,” on this progressive measure, however, does not fully portray similar measures already in place in Montgomery County to improve the environment for pedestrians, bicyclists, transit riders and trail users. Montgomery County has had similar requirements for developers for almost a decade, and has moved on multiple fronts to further strengthen measures to achieve a pedestrian, bicyclist, and transit-friendly and accessible environment.

With each application considered by the Planning Board, developers must submit counts of vehicles, bicylists and pedestrians at each intersection in the affected area. The counts and the identification of deficiencies in the area may trigger a requirement that developers pay for substantial transportation improvements, such as sidewalks, bikeways and trails. 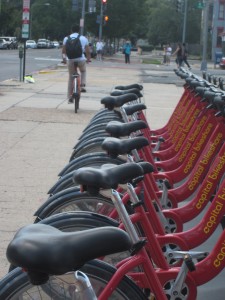 The developer of the Fenwick Station project also set aside land for Montgomery County’s first bike-sharing station, similar to the Capital Bikeshare stations in DC.

Other policies approved in the last decade also set the stage for enhanced pedestrian and cyclist use:

Montgomery County’s creation of the Pedestrian Impact Statement is cited by several organizations and publications as a contributor to improving public health:

We’ve seen the payoff here in Montgomery County. Recent examples include the Montgomery General Hospital expansion project in Olney, Fenwick Station residential development in Silver Spring, Falkland North mixed-use development in Silver Spring, and Woodmont 7200 development in Bethesda. The developer of the Fenwick Station project set aside land for Montgomery County’s first bike-sharing station, similar to the Capital Bikeshare stations in DC. In addition, another developer will be contributing almost $200,000 toward the design and construction of the County’s first stand-alone bike station in Gene Lynch Urban Park, where bike owners will be able to leave their bikes in a secure facility adjacent to the Silver Spring Transit Center. The bike station may include additional amenities such as repair facilities.

Chapter 49 of the Montgomery County Code (the Road Code), which governs the classification, design, and construction of roads in the county, as well as use of the public right-of-way, was revised in 2007 to promote pedestrian and bicycle safety and accommodation and to make our roads more environmentally friendly. Executive Regulations were developed the following year to translate the law’s requirements into standards that would be used to design and construct these roads. This Complete Streets effort is continuing via a collaborative process between the Planning Department and County Executive agencies. 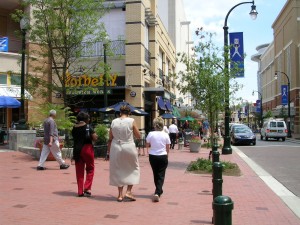 Last but not least, Montgomery County also has worked with the Maryland State Highway Administration (SHA) to ensure that those areas where we have the most pedestrians and bicyclists are designed to accommodate them safely. The White Flint Sector Plan area was approved by SHA on January 31, 2011 as Maryland’s first Bicycle-Pedestrian Priority Area (BPPA). This designation requires SHA to consider changes to the location, construction, geometrics, design, and maintenance of the State highway system to increase safety and access for bicycle and pedestrian traffic in the BPPA, and to consider the use of various traffic control devices to further those goals. SHA is already working on a plan of pedestrian and bicyclist improvements for this area and expects to complete this plan shortly.

In the last few weeks, Montgomery County has designated two additional areas as BPPAs – Takoma-Langley Crossroads and Wheaton – in the Sector Plans for those areas, which now await SHA approval.

We also will include many additional BPPAs around existing and proposed transit stations in the staff draft of the Countywide Transit Corridors Functional Master Plan, anticipated to be reviewed by the Planning Board later this year. The plans and guidelines that SHA prepares for BPPAs will be incorporated into the recommended pedestrian and bicyclist improvements required of developers who work in these areas.

We’re glad that Prince George’s County has taken this important step and look forward to working together to make sure our shared goal of improved accommodation and safety for bicyclists and pedestrians is achieved.

Cherian Eapen and Ed Axler contributed to this post.

2 Responses to “MoCo Considers Cyclists and Pedestrians, too”