In response to the article, “The year ahead: A top 10 list of transportation projects to watch“, I have to say I’m quite disappointed. Not by the content per se, but the title.

Of the 10 projects listed, only 4 are truly “transit” projects; the other 6 are highway projects/roadway improvements (all 10 of which are “transportation” projects). The problem that drives some of us in the design and planning business crazy is that it is precisely because these two concepts are conflated, that we miss the opportunity to truly assess progress for more sustainable, congestion-reducing transportation solutions. Words matter because there is so much baggage attached to them.

While, broadly speaking, “transit” is the movement of something from one place to another, it should be understood more narrowly in these conversations. And transit is not just “mass-transit”, it should cover bikes, buses, light rail, heavy rail, bus-rapid-transit, or any tool to decrease travel by one driver in one car; so maybe we add HOV, or car/van-pooling. Transportation, then, should cover these, plus improvements for the average driver. And a separate argument should be pointed out that roadway improvements – adding lanes, widening roads, installing interchanges – rarely actually improve traffic flow; they typically just fill up with more cars: if you pave it, they will drive.

We fight for hard-earned victories when we can persuade policy makers to think more like transit planners rather than traffic engineers and require transportation departments to focus more on the transit side of the equation. Given the 4/6 ratio of the projects you’ve mentioned, we still have a lot to do. Thus, I think the article – in pointing out the pending projects that will impact our daily commute – you could have been more aggressive in showing that the projects that really could positively influence the environmental impacts and congestion issues are not getting the attention they deserve. For example, in our jurisdiction, the Corridor Cities Transitway, the Purple Line, and the Bus Rapid Transit Amendment to the Master Plan of Highways. These plans, and similar ones in surrounding jurisdictions need more attention and a more critical eye from journalists; we can’t pave our way out of our congestion problem and we need everyone to look at the issues more carefully and analytically.

Apparently, however, the print edition was corrected for the online version; but I think my argument is still valid.  But to prove I wasn’t going nuts: 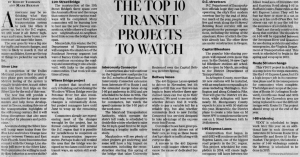