Suburbs have always been an indicator of economic status. If you lived in them, you were wealthy enough to take on a mortgage, maintain a house and yard, and eventually own and maintain one or even two cars.

At some point, that shifted. Living in the city and maintaining a middle class lifestyle took an upper class income. Limited attractive neighborhoods and buildings cost a premium. And if local schools and services were not up to par you needed to pay tuition and fees.

Now, according to Christopher Leinberger and Mariela Alfonzo in the New York Times, a larger number of city neighborhoods are outstripping the suburbs in desirability and thus in per square foot value. Their recent report finds that walkable places have “become more gentrified over the past decade,” with wealthier and more educated residents. And from a list of the walkable communities examined, you won’t be surprised by that finding–Bethesda, Penn Quarter, Logan Circle, Chevy Chase Lake.

But what are the quantifaible elements of a walkable community? He and his co-author found that “the absence of a clear classification of the mix of residential, office, and retail elements that comprise walkable urban places…has been one of the most significant barriers to addressing their demand.” But demand is there–he found that in Atlanta only 35 percent of people who wanted to live in a walkable community actually did.

The characteristics the authors used to define a walkable place are somewhat Lynchian (with my comments in parens):

(The not easily quanitifiable measure I use for a walkable place is the ice cream cone factor. Can I get a cone, and then have a nice and interesting walk while I eat it, and will there be a place to toss my napkin when I’m done. Extra points if I can ride my bike there and burn off some of those calories ! I wouldn’t last a day at Brookings.)

Once you can describe these places, their economic impact can be measured, and Leinberger finds that impact to be considerable. Even controlling for household incomes, walkable places show a higher economic performance, with premiums in office and residential rents as well as in retail sales and housing values.

From the report: “Federal, state, and local policy makers should conduct a systematic review of existing public policies that are biased against walkable development, and adopt new measures aimed at facilitating (or at least removing roadblocks to) this type of development.”

As a suburb within walking, biking, and transit distance of downtown, and one that has its own urban centers, Montgomery is advantagously postioned to add value by creating car alternatives to getting downtown (I’m looking at you bikeshare) and by building up its own urban areas.

The White Flint Plan, the BRT study, the zoning rewrite, even the Parks Department’s community garden program are all moves that will redfine how and were we live by adding more choices. With plenty of suburban single-family communities and the preservation of the Agricultural Reserve, Montgomery will become a layered place, one with options and interest that all add value. 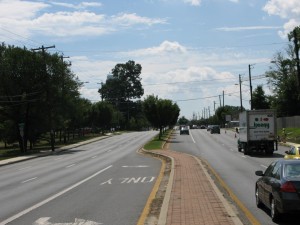 2 Responses to “Walkable Communities vs a Walk-in Closet”