Part of what makes Seaside and its ilk so successful is their attention to detail. And by detail I don’t mean what one observant designer called “frosting”– banners, lamposts, and fountains.

A more structural approach to designing a space or place begins with elements that are obvious in plan view–terminated views, street grids, and a central square. That initial street grid is punctuated by a square, then further embroidered with paths and smaller spaces.

looks good even from up here

But even those public spaces and paths are treated with varying levels of complexity. The formal public lawn is neatly mown and edged, but other spaces are more casual. 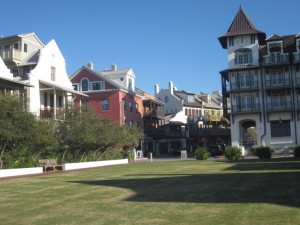 a formal space, shoes shined and shirt tucked in

causal and as comfortable as your favorite jeans

The path in front of your house is paved and raked, the one behind a barefoot track. 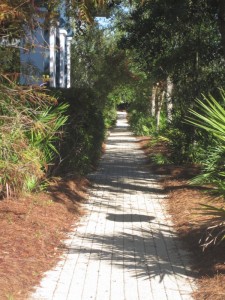 as some say, Queen Anne in the front...

...and Mary Anne in the back

And this doesn’t take a lot of money or design with a capital D. It takes attention to detail and even function.

But what I really like is the sense of depth and definition in these places; they don’t peter out into parking lots. 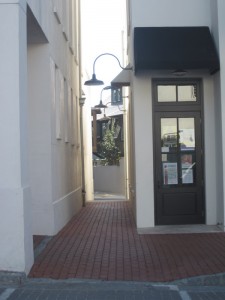 some complexity on the way to your latte

Much of this seems serendipitous, but the cynic in me knows that every brick is carefully considered. The details almost transcend architecture to become elements in a script. Visitors and residents seem to have entered into a  Disney-like contract–because the place looks a certain way, we’ll behave a certain way. The neatly arrayed food trucks selling retro-charming food are lit by artfully hung bare bulbs and their soundtrack is surf music.

3 Responses to “Duany is in the Details”