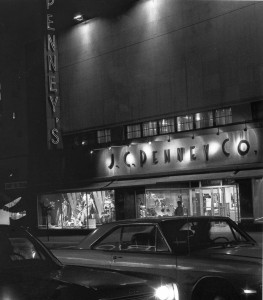 Montgomery County residents of a certain age will recall when the Colesville Road J.C. Penney’s was a back-to-school shopping ritual. Its Art Deco façade, neon signage, and brightly illuminated windows attracted shoppers from across the region. Combined with Hecht’s and Jelleff’s, it contributed to the vibrancy that made Silver Spring Maryland’s second largest shopping destination.

In 1985, the Planning Board recognized the store’s architectural and historical significance, listing it in the Locational Atlas and Index of Historic Sites as part of a historic district in Silver Spring’s Central Business District. But the Locational Atlas provides limited protection for identified resources.  Subsequently, the building’s owners were allowed to demolish the rear of the store but were required to retain the Colesville Road façade.

The building is poised for a second act. Again, it will attract people to Silver Spring, but this time for music.  The Fillmore music hall, planned through a partnership between Montgomery County economic development officials and landowner Lee Development Group, will incorporate the store’s façade into the design of  the nightclub, expected to be part of the Live Nation chain.

As a requirement of the building’s historic status, the development team worked with the Planning Department’s historic preservation planners to make the façade work as a nightclub while preserving its historical characteristics.

The first plan, with its ticket windows surrounded by solid panels, removed the streetfront transparency.  Preservation planners encouraged the design team to create a lively street frontage by increasing the amount of glazing – and void to solid ratio – to better replicate the façade’s historical appearance.

Also, the initial signage plan was —at eight feet tall and 39 feet wide—nearly half the width and a fifth of the height of the building’s façade, a significant departure from its historic appearance.

After some iterations, preservation planners approved a plan that increased the amount of storefront glazing and reduced the size of the signage, which planners believe will make the new nightclub more consistent with the façade’s historic appearance.  Planners believe that increased transparency at the sidewalk level will contribute to an active streetscape that will once again enliven Silver Spring’s central shopping and entertainment district.