As mentioned in the first Rethink event, the blogger panel, FAR (never pronounced far, but each letter: f-a-r, standing for floor area ratio) is one of the more obscure bits of planner patois.

In urban areas, FARs tend to be high, around 6 or 7 in downtown Washington and around 19 or 20 in midtown Manhattan. To planners and developers, FAR is the most fundamental dimensional standard of a zoning code. It determines a lot’s development potential and hence its value. An FAR of 4 is worth twice as much as an FAR of 2.

FAR is a rational tool, but can be coarse in its application. It allows an infinite variety of building designs, but can’t address the details of setbacks, build-to lines, and human-scale like windows, doors, and materials. FAR controls bulk, but the character of a street comes from the fine grain.

In a suburban landscape diffused by roads and sky, with a changing character and large lots, FAR is only one tool to shape building character. The effect of a six-story building versus an eight-story building will be hard to perceive, but what will be evident is the parking lot in front of it or the odd strip of lawn that surrounds it. 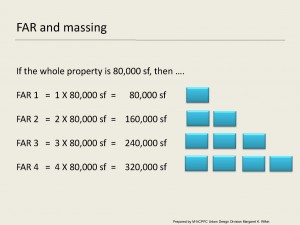 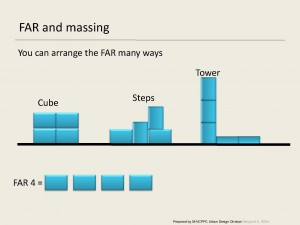 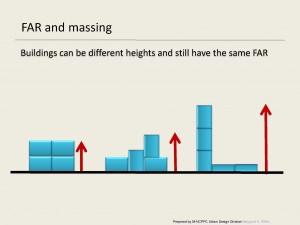 2 Responses to “FAR is Your Friend”