The exuberant mid-century modern design of commercial signs captures the entrepreneurial spirit of mom and pop shops that thrived during the post-World War II population boom of Montgomery County.

With loud colors and catchy shapes, the quirky signs howled for the attention of passing motorists. In recent years, the style has been dubbed Googie, after colorful California coffee shops of the day. These roadside signs are a record of the past, modern design, and the independent businesses that were staples to county residents. 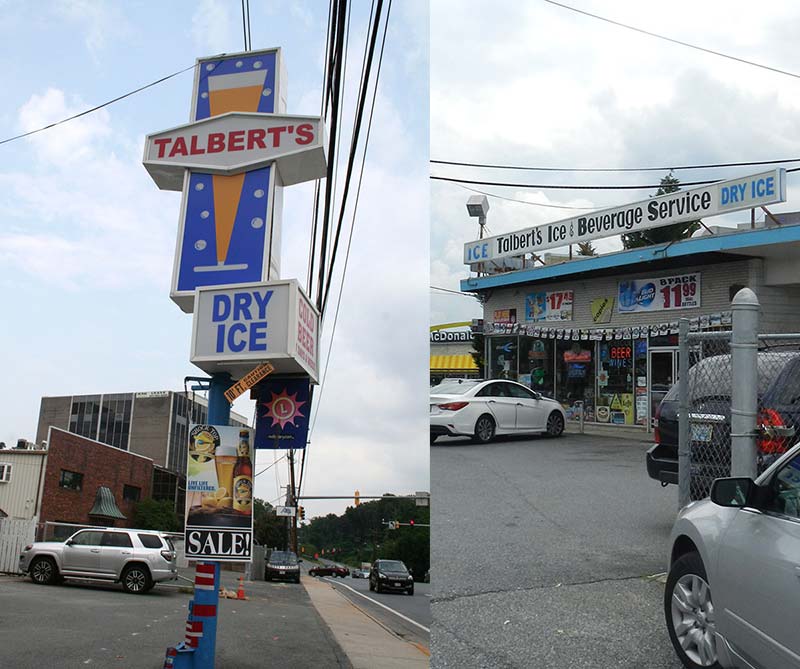 Sporting a tall cold beverage, the sign for Talbert’s Ice and Beverage Service advertises cold beer, dry ice, and regular ice.  The store building, at 5234 River Road in Bethesda, was built in 1946, according to tax records. Jack Talbert, a Georgetown native and duckpin bowling champion, died in 1955 at the age of 51 and his business was later sold. The business name and preserved signage reflect the family history of the company. 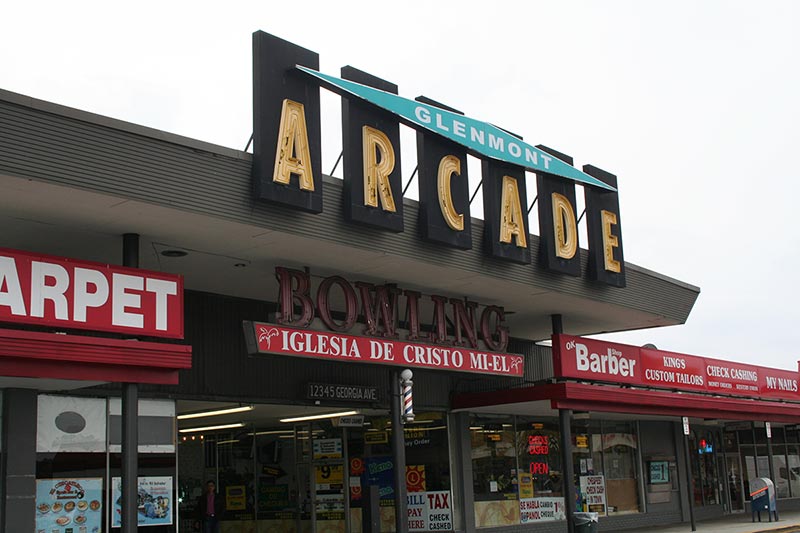 Built in 1960, Glenmont Arcade boasts a bold geometric sign clearly visible from its knoll above Georgia Avenue, between Randolph Road and Layhill Road. Designed by Bartley & Gates, the shopping center, at 12345 Georgia Avenue, has an interior courtyard with shops, and originally had a duckpin bowling alley in the basement—now used for church services. 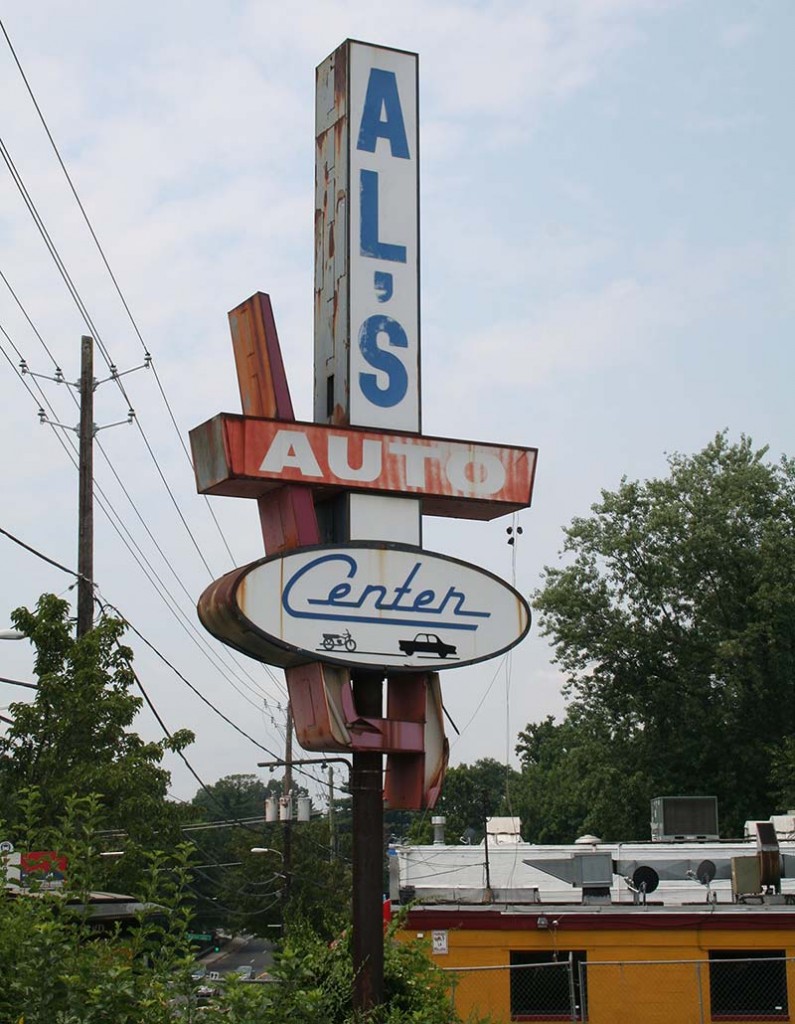 The sign for Al’s Auto Center is all that remains of the business located on Piney Branch Road, West of University Blvd. The sign is enlivened by a stylized car with motorcycle and vintage lettering that decorate an oval floating above a boomerang arrow. Little is known about the business—perhaps it was a branch of the Al’s Auto Center located on Eye Stret NW by 1959. 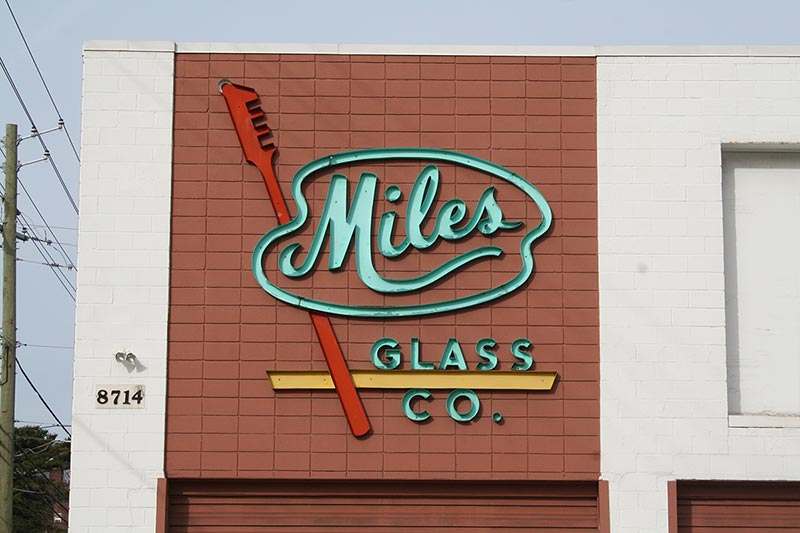 Miles Glass Company featured a glass-cutting tool on its bright neon sign mounted on the building at 8714 Piney Branch Road, later demolished. Opening in 1964, the Silver Spring location was the fourth branch for the family business that was headquartered on 4th Street Northeast. This photograph was taken in 2013. 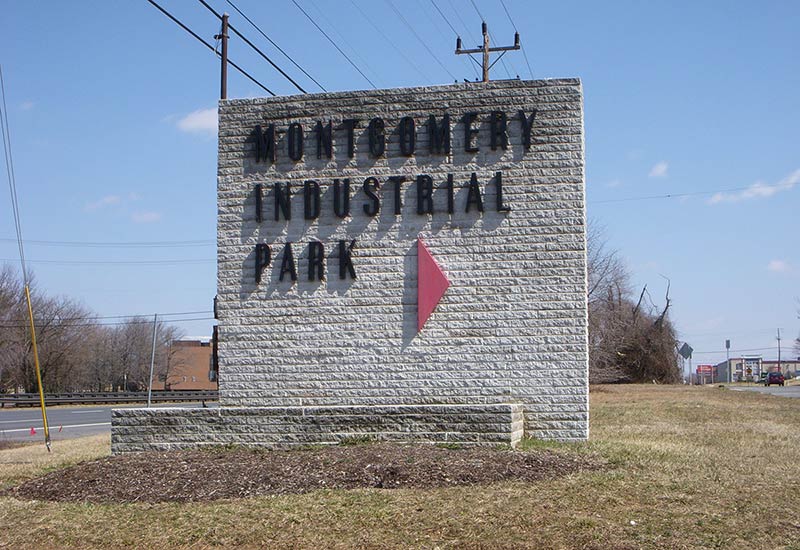 Black lettering contrasts with pale masonry in the bold yet understated Montgomery Industrial Park sign. A loud design isn’t needed for businesses that don’t draw from passersby but from an established clientele, yet a splash of red directs visitors off Columbia Pike. Montgomery Industrial Park dates from 1961. One of the first businesses to open was the USI Robodyne robot factory at 12345 Columbia Pike, the subject of a previous blogpost. 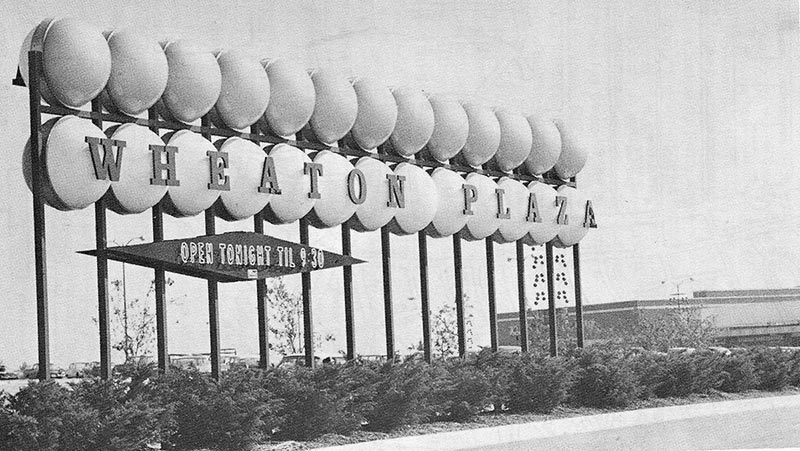 Gone but not forgotten is the whimsical sign of Wheaton Plaza. When it opened in 1960, it was the largest shopping mall in the Washington DC region. The mall was later enclosed and is now called Westfield Wheaton. This period photograph is from the Wheaton-Kensington Chamber of Commerce. 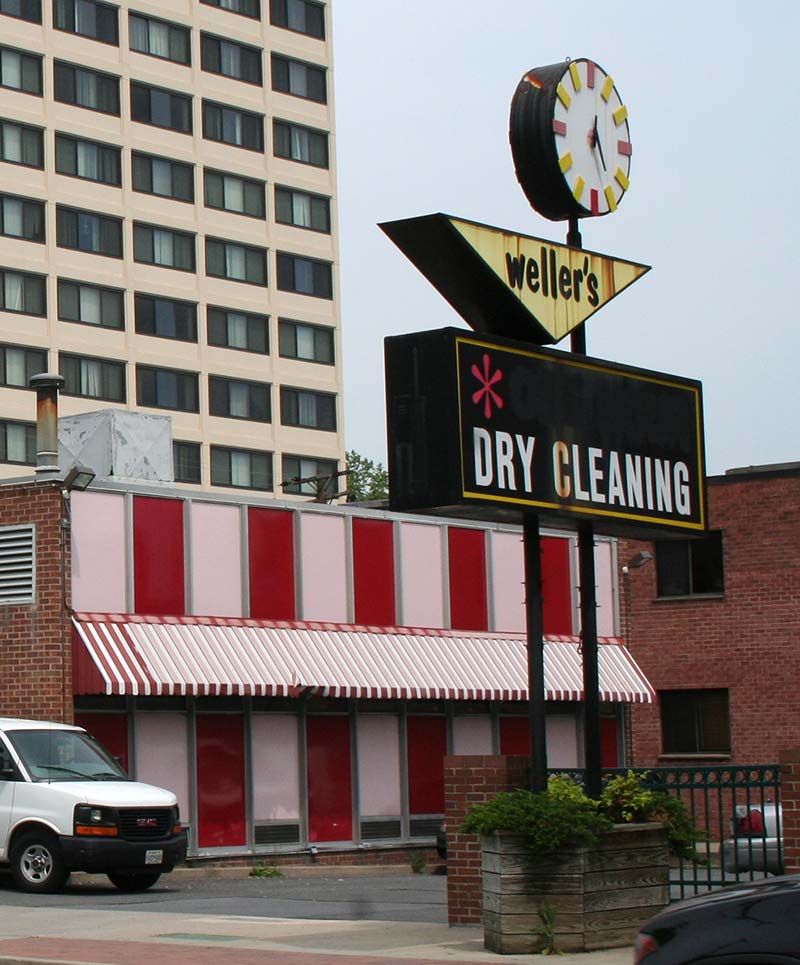 The space age sign for Wellers Dry Cleaning, 8327 Fenton St, lets Fenton Street passersby know that it’s time to get your clothes dry cleaned. Dating from 1960, Weller’s was designed by local architect Ted Englehardt. For more on Weller’s see our blogpost on this Silver Spring business. 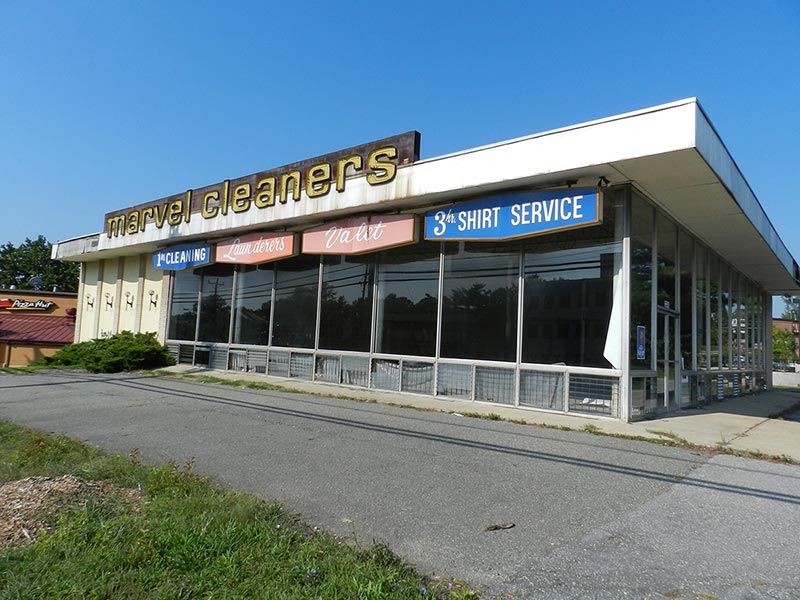 Googie signage with bright colors and angled shapes transforms the Marvel Cleaners building into an advertisement. The store was built in 1967 at 13340 New Hampshire Ave, Silver Spring. Home of the National Dry Cleaning Institute which conducted research and set standards, Silver Spring appears to have a disproportionate number of dry cleaning businesses. 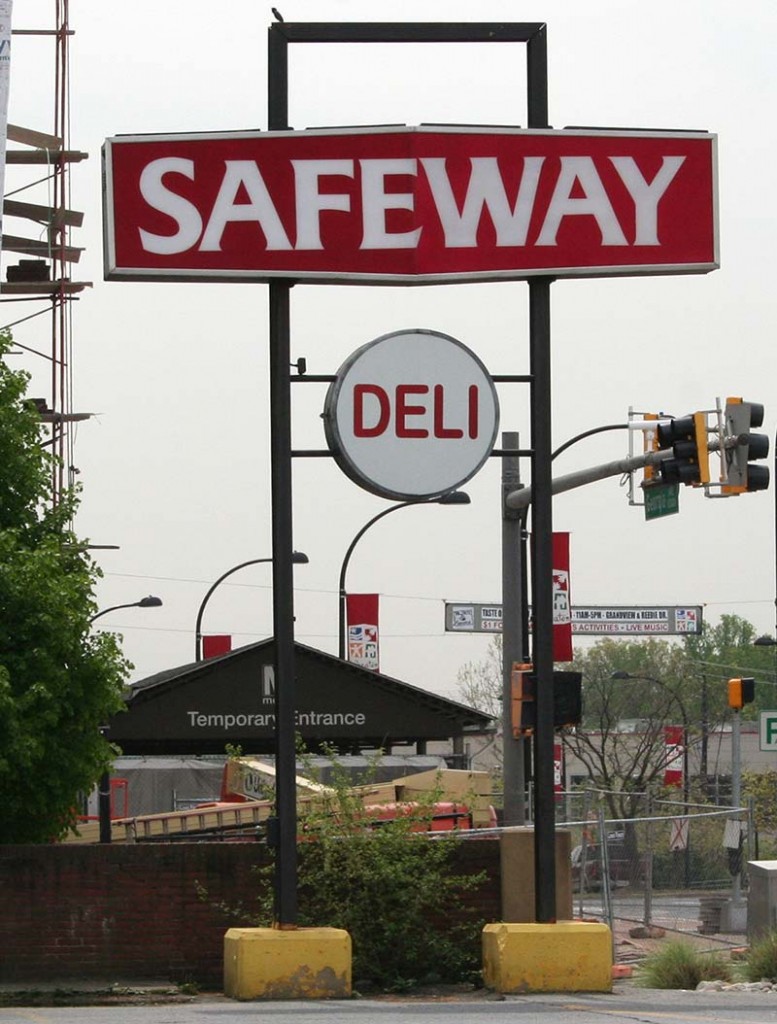 Photographed in 2008, this sign was a companion to the mid-century Safeway, in Wheaton, later demolished for the new Safeway and high-rise. Still standing in Four Corners is an original vaulted-roof Safeway, at University Boulevard north of Colesville Road. 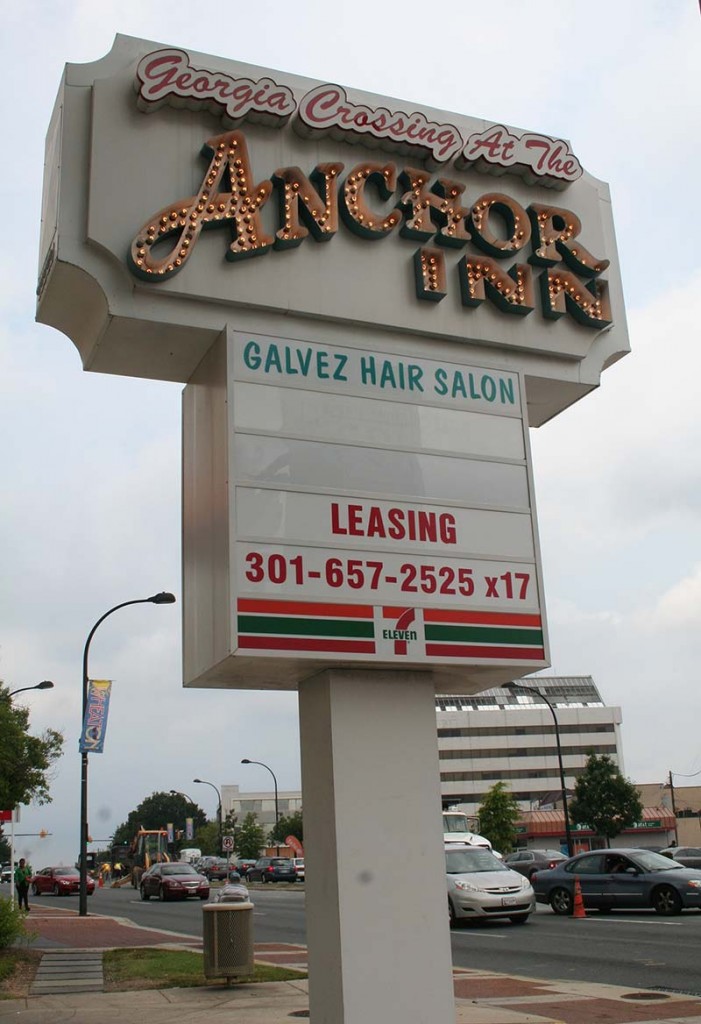 The Anchor Inn restaurant opened in 1954 on Georgia Avenue at University Boulevard, in Wheaton. Though the business closed and the building was demolished in 2006, the iconic sign was retained and augmented with lettering to advertise the redevelopment. 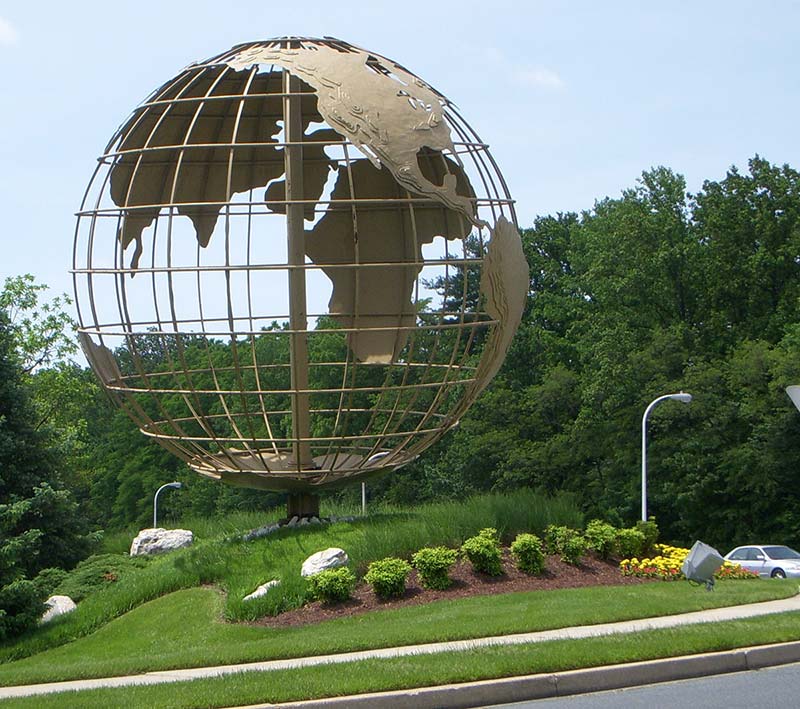 For those who yearn for more on the subject of roadside signage, the Roadside America exhibit at the Henry Ford Museum features signs from across the country, and the photographs of John Margolies.