On a recent trip to Savannah, we not only had a wonderful time – we learned a few unexpected things. There’s more to the city than the beautiful downtown (with omnipresent SCAD buildings), there’s the economy built on an infrastructure that allows Savannah to be the fourth busiest port in the country (according to our boat tour guide) linked to an extensive heavy rail system. And evidence was obvious on the river – even from the window of the restaurant where we had lunch one day. Transit, however, is generally absent; the free Downtown Transportation (DOT) bus is fine, but it covers an area that’s easy enough to walk. 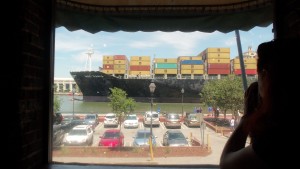 Freighter Heading up the Savannah River

MoCo’s economy seems more diverse than Savannah’s, but is becoming focused on the life sciences, especially in the fields of health and biotech research. Our own Life Sciences Triangle is beginning to take form – between Bethesda, the Great Seneca Science Corridor, and the White Oak Science Gateway. Two keys ensuring the success of this vision will be linking these areas together and ensuring that there is a robust, mixed use, 24/7 economy around these key nodes. Generally, the latter is a matter of zoning and these areas are developing (or have the potential to develop) with housing, retail service, and employment opportunities. The former, however, is more difficult. Luckily, the early stages of creating transit links are completed and schedules are moving forward.

But there is hope. The general alignment for the Purple Line transit link between the Bethesda and New Carollton Metro stations has been set since 2009 and several planning studies are being done for areas around key nodes along the line: Takoma Langley Crossroads, Chevy Chase Lake, Long Branch, and Lyttonsville-Rosemary Hills. Another study is ongoing: the Countywide Transit Corridors Functional Master Plan, which will be followed up by a BRT – Land Use Plan. Of course, the Zoning Ordinance Rewrite is also ongoing and being coordinated so that we will have the zoning implementation tools necessary to help these new opportunities succeed. 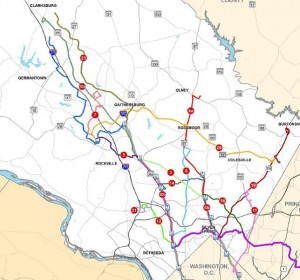 And now, the Corridor Cities Transitway (CCT) locally preferred alternative was announced by the Governor’s office on May 11th (press release not online yet) and the schedule has been laid out to implement phase 1 – from Shady Grove Metro station to the Metropolitan Grove MARC station, with service to begin in 2020. 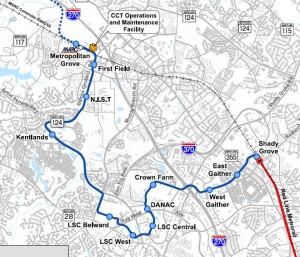 Funding is, of course, a huge issue. But, as Infrastructure 2012 points out, that there are numerous options as budgets and federal funding become constricted, such as:

There also will remain some Transportation Infrastructure Finance & Innovation Act funds designed to leverage these more local alternatives, and a combination of various sources is likely.

Each of these funding sources have been used by various municipalities and the pros/cons and a few examples are laid out well in the report. It’s time to look carefully at the next steps to implement these links and build on the vision that is just beginning to take shape around our evolving, focused economy.