Last Wednesday, the National Trust for Historic Preservation released a report demonstrating something some will find counterintuitive or even dubious, but which many of us in the historic preservation field have thought for years: reusing existing buildings almost always offers more environmental savings than demolition and new construction.

The study, The Greenest Building: Quantifying the Environmental Value of Building Reuse, includes some interesting findings: 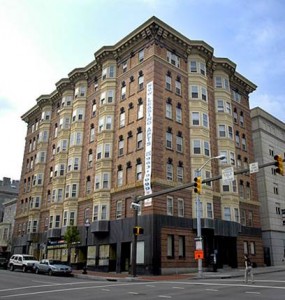 As you might expect, the preservation community is excited by these findings. But urbanists, environmentalists, the mainstream media, and government are taking notice as well. The buzz is palpable.

The marketplace has responded too. The United States Green Building Council, the organization behind the LEED environmental certification program, recently announced that LEED certification of existing buildings has surpassed that for new building construction.

The US government estimates that each year approximately 1 billion square feet of existing building stock is demolished and replaced, while the Brookings Institution suggests that one-quarter of existing building stock–fully 82 billion square feet–will be demolished and replaced between 2005 and 2030. That is a lot of construction debris going into landfills. But even if all of these new buildings are high-performing, we will not be able to build our way out of our carbon dependency.

save me and save the earth

As the Trust’s study demonstrates, taking advantage of our existing building stock must be central to our efforts to meet carbon reduction targets and address climate change. In addition to considering the cultural and economic arguments for preserving old or historic buildings, environmental factors should be considered.

Maybe, just maybe, these findings may broaden the circle of people who see value in our existing building stock.