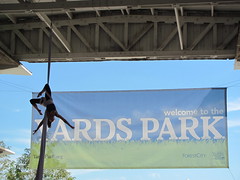 This past weekend, the Capitol Riverfront area celebrated the grand opening of the Yards Park.

The new park is located along the Anacostia River between 3rd Street SE and the Navy Yard. It was built as a public-private partnership between the developer of the Yards, the government of the District of Columbia, and the General Services Administration. It’s managed by the Capitol Riverfront BID.

A festival marked the opening this weekend. It included bands, artists, vendors, and more. I had the opportunity to stop by, and I snapped some photos. The park is very well designed, and I can only hope it is an example of future waterfront parks in the area.

It has many features which help to make it a great urban park. In addition to passive spaces like lawns and plazas, a pavilion and terraced steps offer places for programmed activities. I imagine that the boardwalk, with its sweeping views of the Anacostia River, will be very popular.

A walkway around the perimeter of the wading pool leads to a boardwalk alongside the Anacostia. The boardwalk is lower than street level, and where it intersects the pool, there appears to be room for retail underneath the overlook plaza at the level above.

That plaza is adjacent to the “Lumber Shed”, which is temporarily being used as a pavilion. Eventually, it will be enclosed for use as retail or dining.

Further east, terraced steps allow gathering for concerts or performances on the boardwalk, where a stage can be set up.

West of the overlook plaza, a unique steel bridge crosses over the wading pool and leads to a green lawn surrounded by wavy wooden benches. Another passive green space is to the east of the Lumber Shed.

This park is a great addition to Washington. The well-thought design is long overdue and the features give Washingtonians new ways to relax and recreate. Hopefully, DC will find a way to extend this park and also replicate its design elements along other parts of the Anacostia and the Potomac.

2 Responses to “New Yards Park is dressed to impress”