More and more this is happening through the web. The Straight Line and now our Director’s blog are just two examples of community engagement through the web. Friends of White Flint’s FLOG played a key role in promoting community participation in the White Flint Master Plan. And increasingly local bloggers are getting the word out about upcoming public meetings and doing follow-ups for people who missed them. 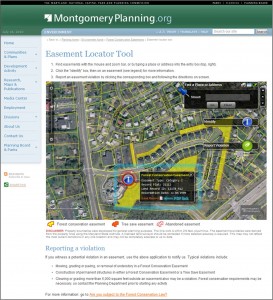 The Department has launched web maps before but this was the first with the capability of a two-way conversation with citizens. The public can pinpoint the location of a possible violation on the map. Staff gets an email to investigate the incident and can follow up with the citizen-reporter on its status. We’ve since built other interactive map applications that help us be transparent and responsive. 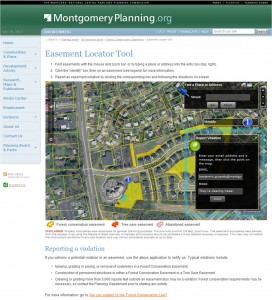 There’s growing discussion on maximizing the web for meaningful community participation. Some are calling it Planning 2.0. I recently listened to Dr. Ahmed Abukhater from ESRI speaking on the topic at the TUgis Conference where he described community meetings on the web in a two-way format and getting master plan comments from the public through tweets and facebook. But how do we build something that is user-friendly but also generates data and proposals that staff can integrate into plans? Blog conversations are helpful for ongoing education and engagement but can lack a structure that’s easy to break down into useful data for a particular plan. 140 character tweets might not be sufficient for getting a point across and, even taken cumulatively, could they really improve a master plan?

Residents could post a bike trail proposal for a new master plan by drawing a line directly on an interactive map. Others can comment on the bike trail or just vote it up or down. Staff could identify what proposals are getting consideration and explore their feasibility. Ultimately the proposals could be tracked to show how and if they end up in the final master plan.

There’d be a whole lot more to think through to implement something like this, of course, but the other big question is—to paraphrase a classic movie line—if we built it would they come? How much more community participation would we get from building applications like this? If so, would it lead to better plans? At this point, it’s hard to guess, leaving me as confused as Kevin Costner in a cornfield.