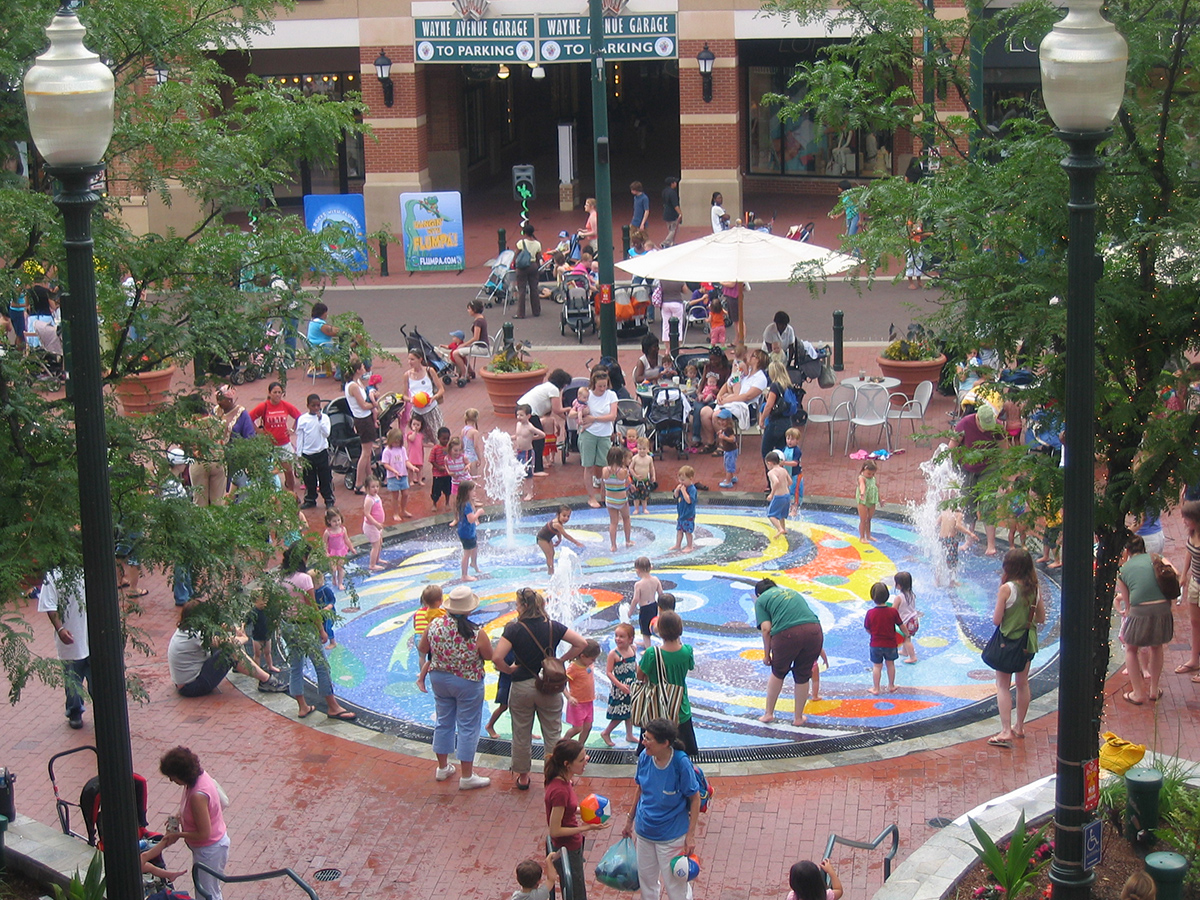 The Montgomery County Planning Department, in cooperation with the Metropolitan Washington Council of Governments (MWCOG), recently developed a new forecast of population, households and employment from 2010 to 2045.  These data-based forecasts are used by government entities and the private sector for various uses, including transportation, water and air quality modeling, and analyzing commercial and residential markets.  This latest forecast, known as Round 9.0, is a major reassessment of assumptions made about people, households and jobs in the county.

Figure 1.  Round 9.0 Forecast of Employment, Households, and Population 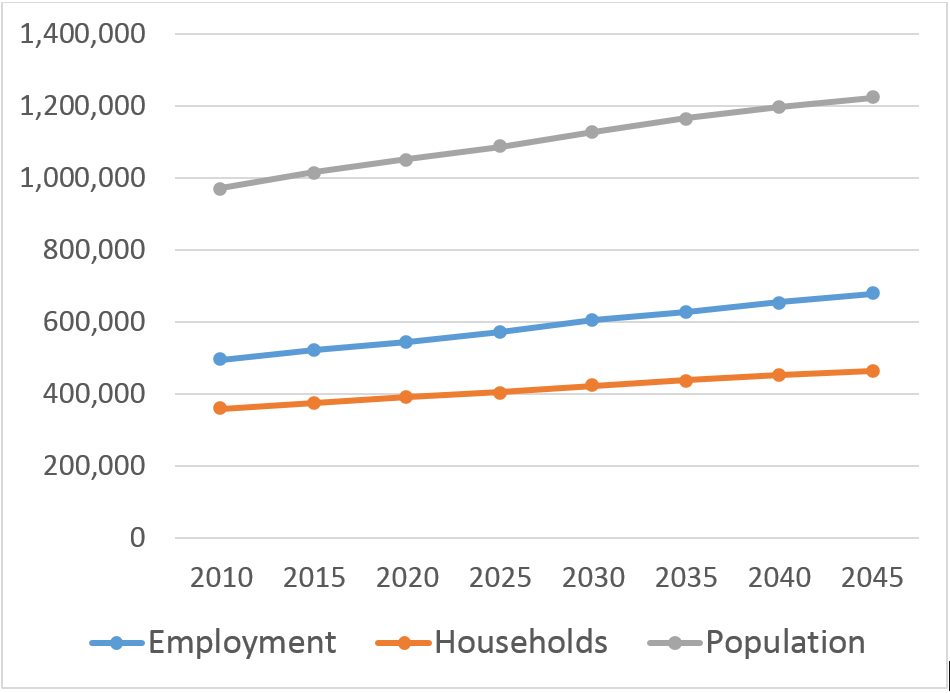 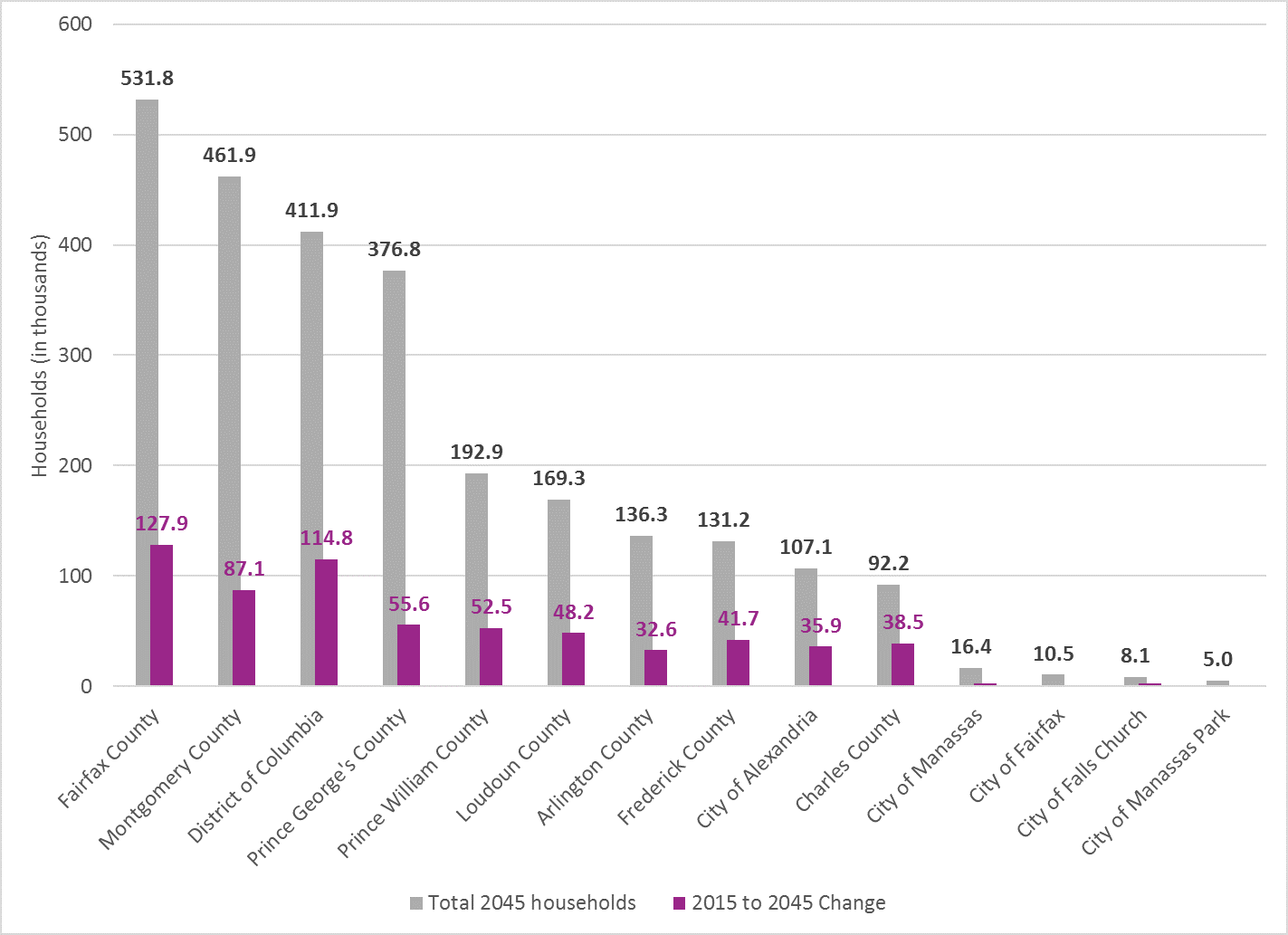 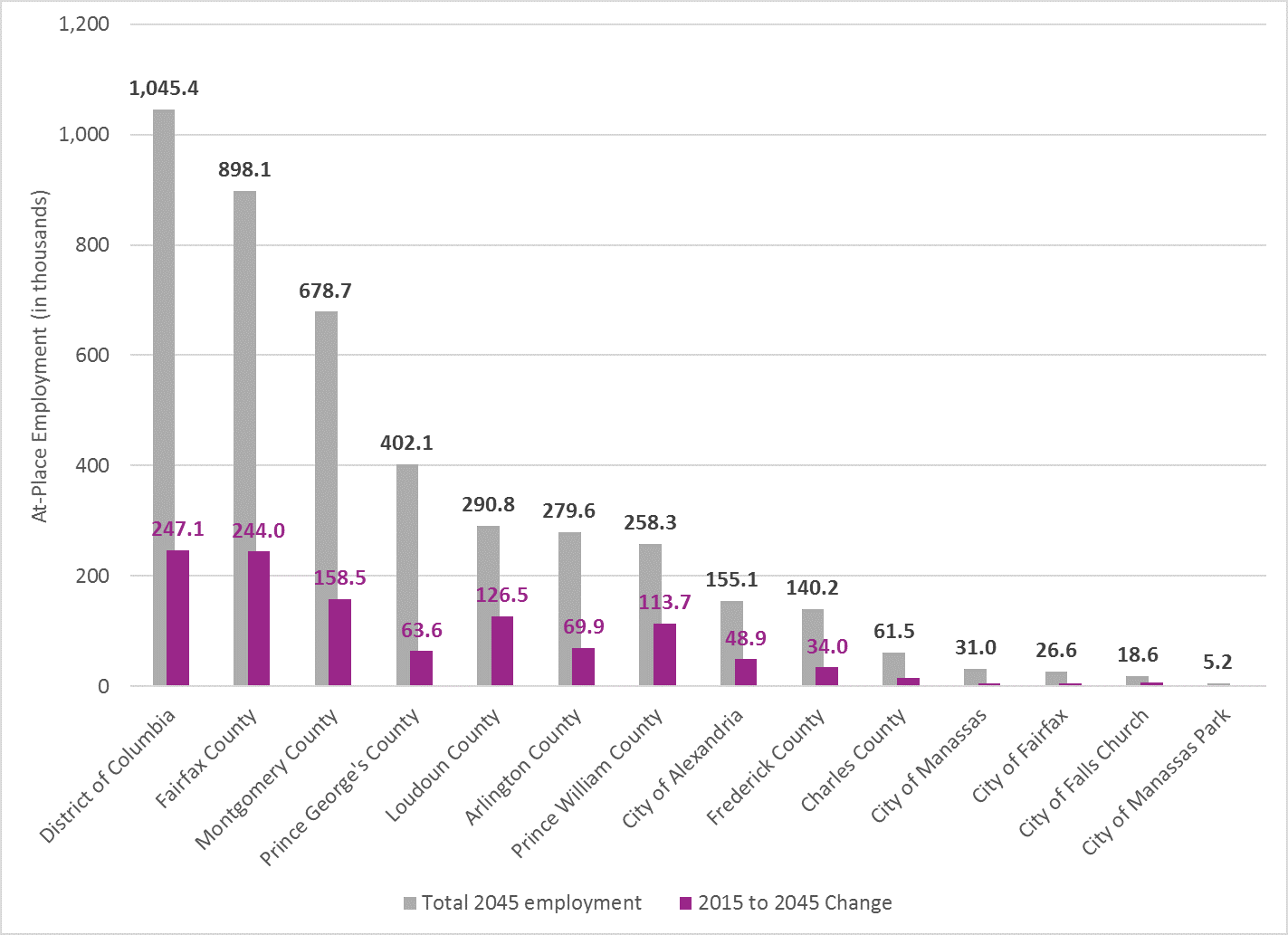 Of course, not all growth is expected to occur uniformly throughout the county.  Different neighborhoods accommodate different densities of residential and commercial uses that yield household, population and employment growth.  For planning purposes, Montgomery County is divided into 33 policy areas. A policy area is defined as “a geographic sub-area of the county delineated by the Planning Board and adopted by the County Council in the Growth Policy for the purpose of staging analysis and the establishment of transportation staging ceiling capacities.” When the forecast is analyzed at the planning policy area-level, household growth varies across the county.  From 2015 to 2045, household growth is expected to be most pronounced along the Interstate-270 spine, along the Metrorail Red Lines, and the White Oak vicinity (see Map 1).  The 10 policy areas likely to see the greatest growth in households, in descending order, are: 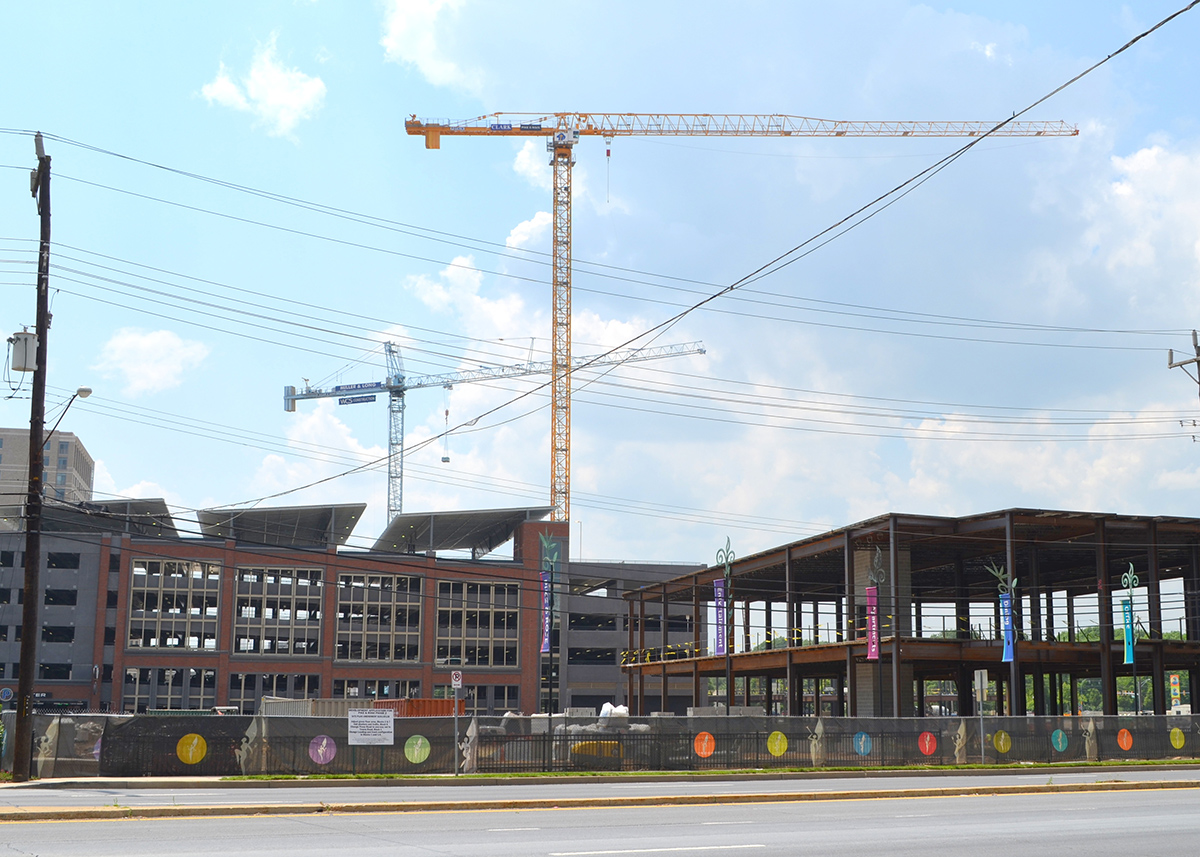 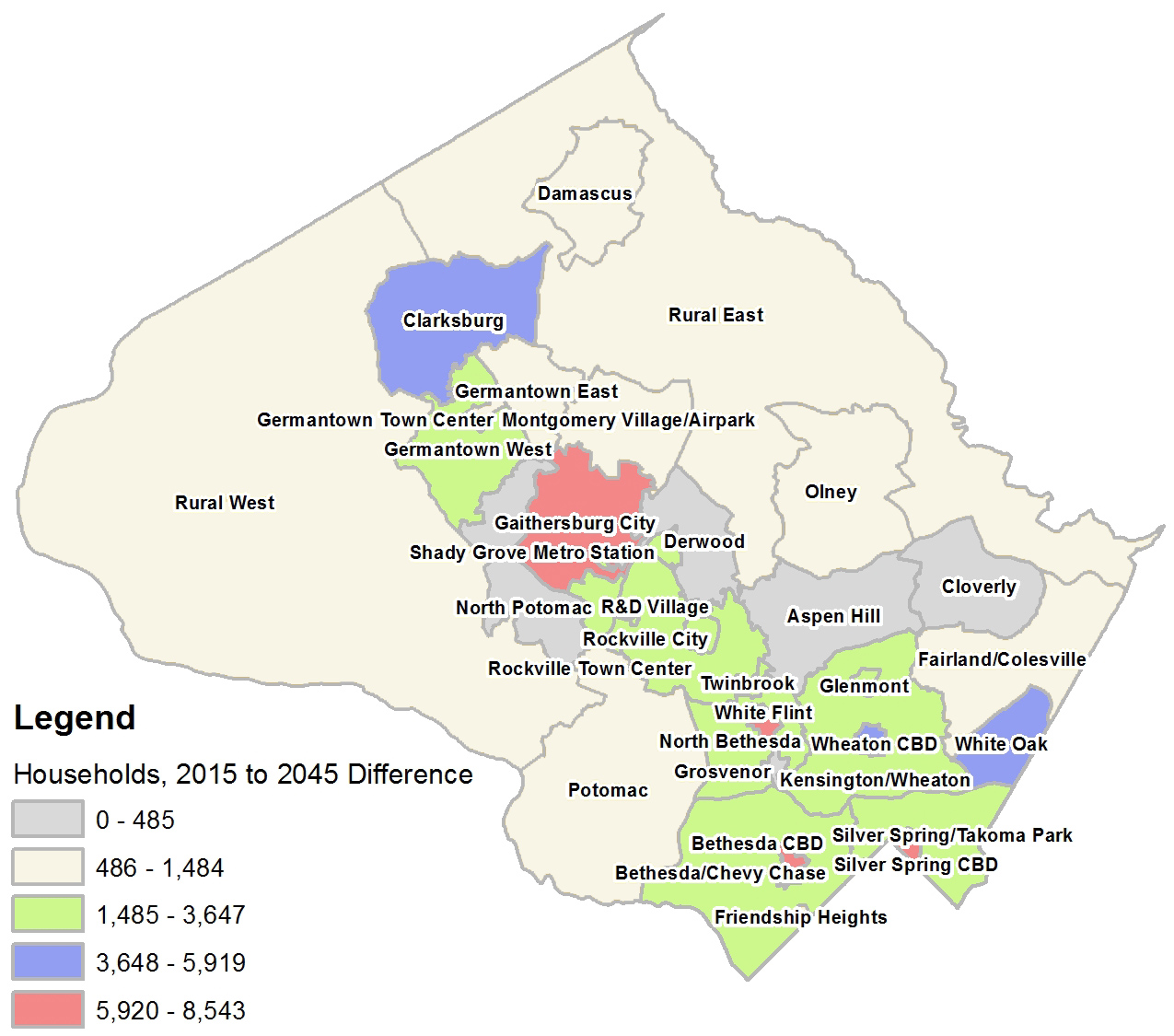 Note that the subarea estimates do not take into account the impact of any in-progress master plans, which may change the envelope of allowable development and densities.

The pattern for population growth is similar to that of households—unsurprisingly, given that households represent the occupied units where related or unrelated persons live.  In the 2015 to 2045 time-frame, the top 10 policy areas by population gain are expected to be the following: 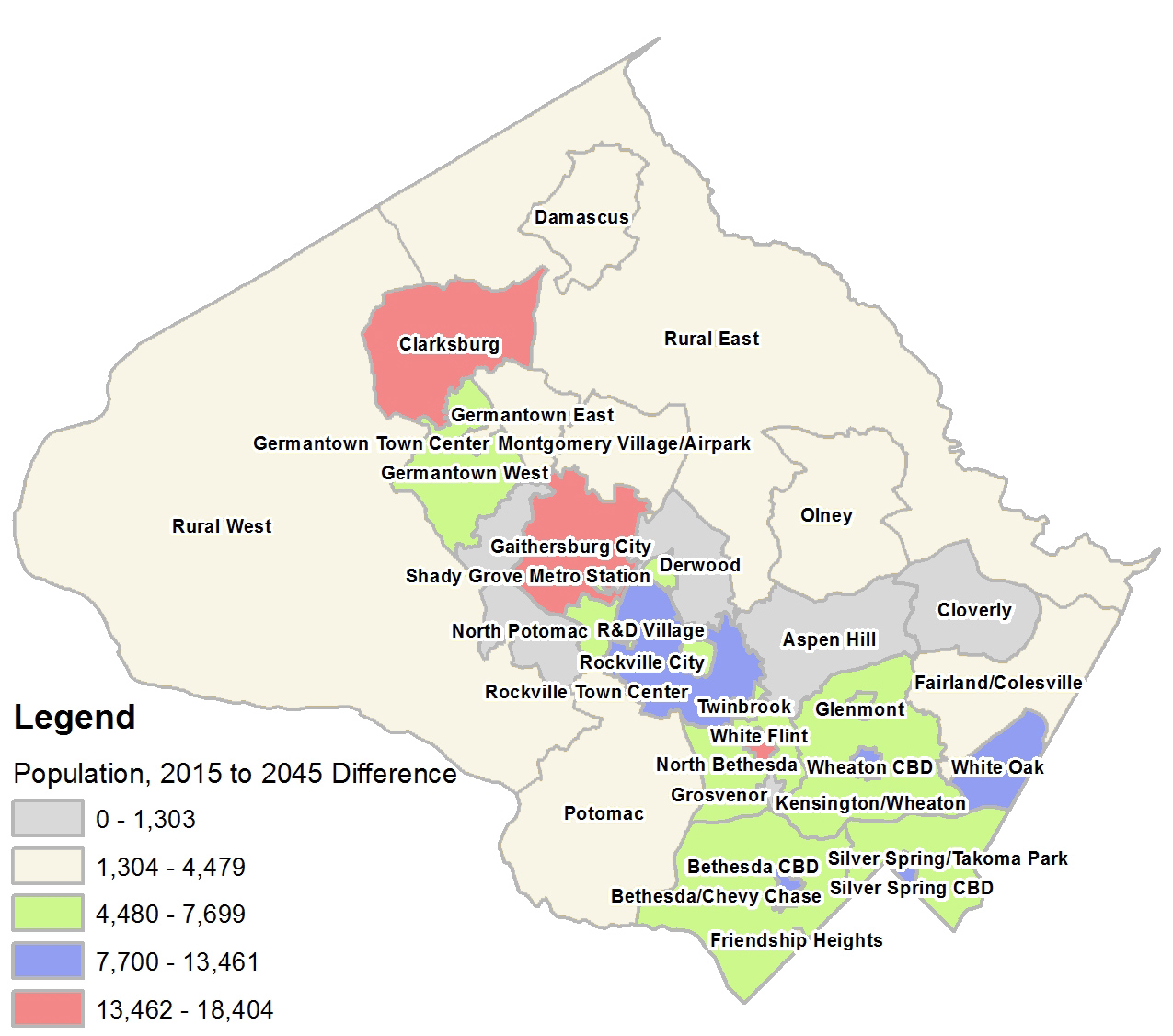 The top 10 policy areas for forecasted net job growth, in descending order, are: 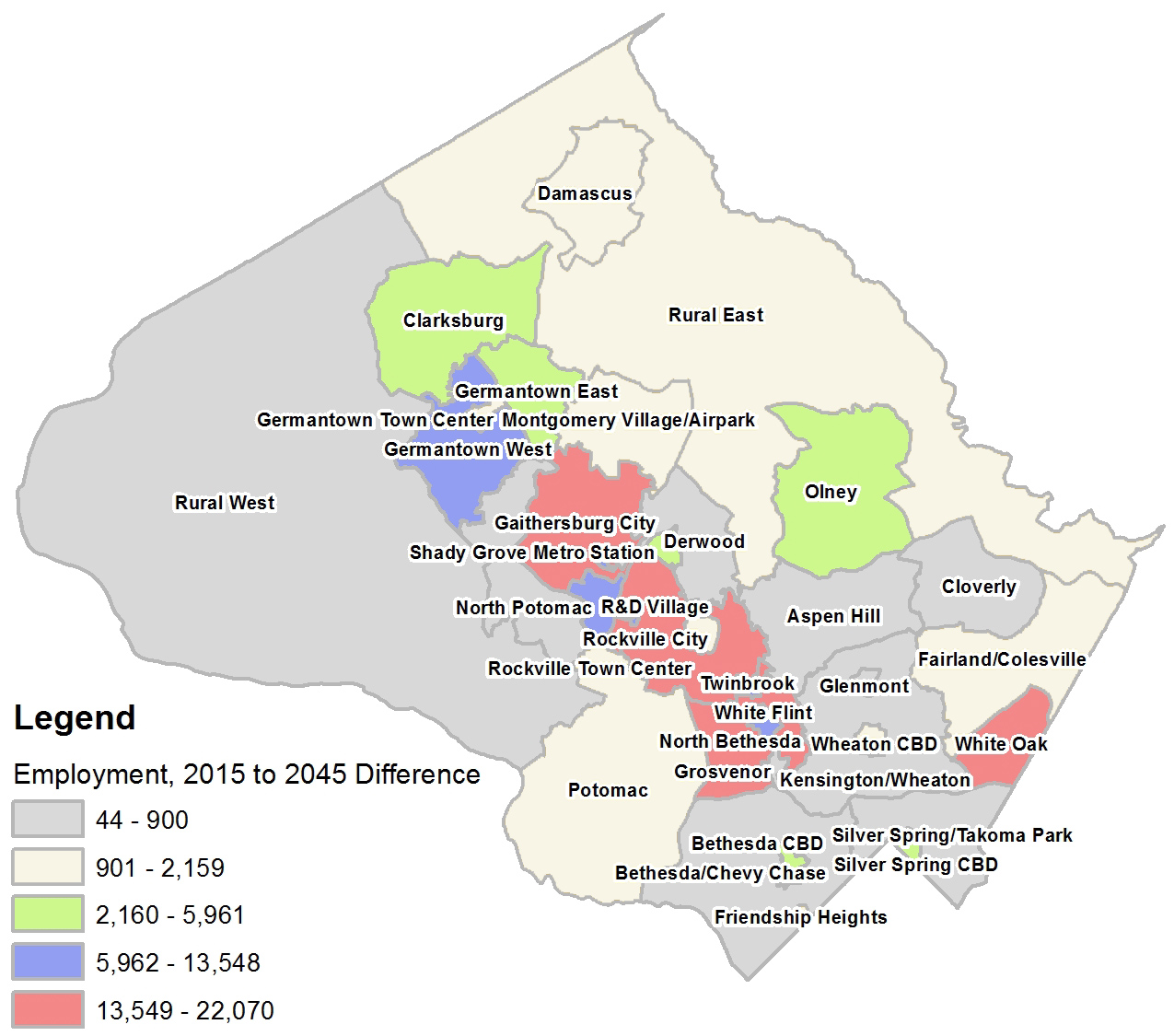 The locations for employment and population growth reflect the current and expected future market desirability of policy subareas based on current and planned infrastructure and transportation access.  For example, the White Flint area is currently an attractive market for employment and household growth based on its access to Metrorail and I-270 highway and the appeal of its amenities, such as retail and entertainment venues at Pike & Rose.  As a result, this area is undergoing transformative growth, which is expected to continue with a pipeline of about 2,900 multi-family residential units, 2 million square feet of office space and 517,200 square feet of retail space approved and not yet built.

Other areas, such as the Great Seneca Science Center, do not have significant active construction projects currently, but they have potential to accommodate future employment and household growth with planned future investments.  The forecast assumes that the catalyst for future construction activity in such areas will be significant infrastructure investment that provides transportation access other than the automobile, such as was the case in the Bethesda and Silver Spring CBDs with Metrorail.  In the case of the Great Seneca Science Center, the forecast assumes that the Corridor Cities Transitway (CCT), a bus rapid transit line, will be functioning between the 2030 and 2035 period, and will spur development by efficiently connecting workers to jobs and making the area desirable for future residents.

The Montgomery County Planning Department’s participation in the MWCOG cooperative forecasts dates back to 1976.  The Round 9.0 forecast is considered preliminary and is expected to become official in November 2016 when the MWCOG Board officially approves.  Each forecast is done in cooperation with the Cities of Rockville and Gaithersburg, which perform their own independent forecasts.  The forecasts are distributed spatially by Transportation Analysis Zones (TAZ) which are defined as “distinct areas defined by natural or man-made features” according the Planning Department’s glossary of planning terms.  Montgomery County has 376 TAZs, of which the Planning Department is responsible for the forecast allocation of 321 TAZs (see Map 4).  The rest of the TAZs come under the forecast responsibility of Gaithersburg or Rockville. 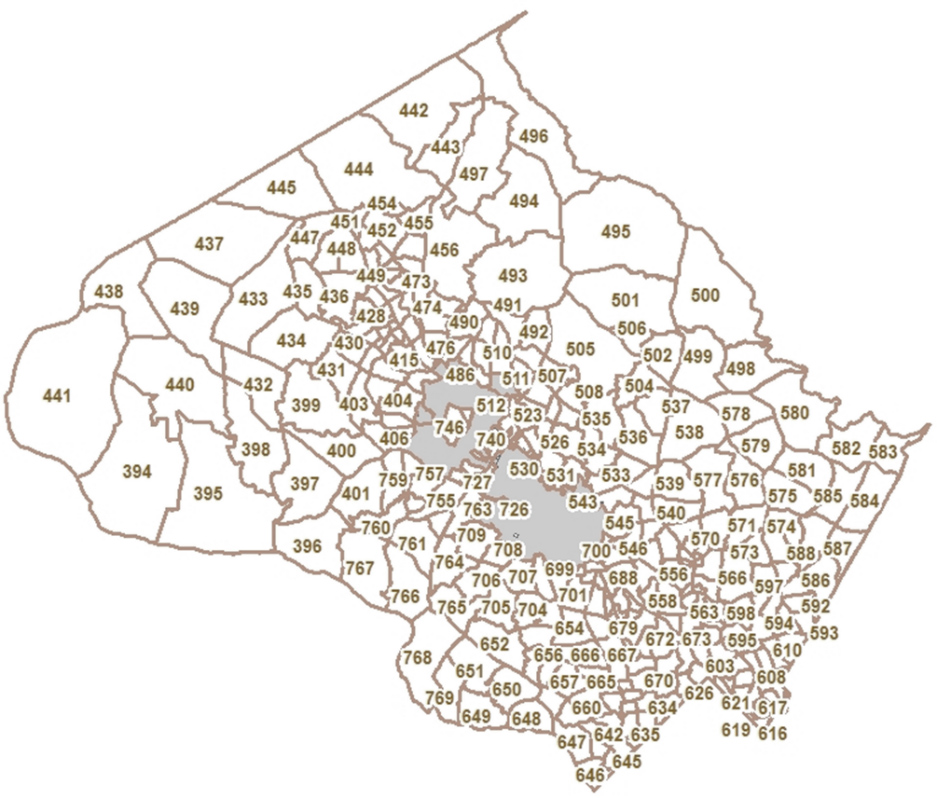 As a member of the Research & Special Projects Division, Robert Ruiz is responsible for the department’s cooperative forecast and providing master plan teams with demographic and employment information for purposes of understand the plan area’s community and assess future impacts.