Zoning codes literally shape our communities, governing the spacing of driveways, the number of spaces in parking lots, the heights of buildings, the placements of sidewalks, and the size of blocks along with the activities (or “uses”) allowed in each neighborhood. These codes determine whether we will live in a compact, walkable community or in a place where an automobile is needed to get anywhere.

Paris, one of the most beautiful, yet densest cities in the world, had simple guidelines that dictated locations of boulevards, squares, parks and monuments, and heights of only 5 to 6 stories. These guidelines, still in effect today, were all about the aesthetics of place.

Some codes have been found that date back thousands of years. Many European cities have been continuously coded since the 11th or 12th century, contributing to the character that makes these cities appealing today. These rules were created to govern the relationship between what gets built on private property and the public spaces around it, and they typically regulate setbacks and building heights in order to ensure that any new structure will contribute aesthetically and functionally to its surroundings.

Boston’s Back Bay was developed with 3 simple guidelines that dictated street widths, setbacks and building heights resulting in one of the most beautiful neighborhoods in the United States.

Midway through the 20th century, land-use regulations were stripped of any sense of spatial logic or of any unified vision of how communities should look. Instead, cities and towns are now shaped by abstract formulas based on parking ratios, lot sizes, floor-area ratios, setbacks and the like. Each of these standards may seem sensible standing alone, but collectively they fail to improve the character or quality of the places they are intended to protect, and in many cases they have proven counterproductive.

Zoning codes have evolved to support environments dominated by automobile travel, with little regard to the needs or interests of pedestrians. The separation of uses was idealized, and the idea that someone would want to walk from their home to a restaurant or store was unimaginable as a normal pattern of daily life. Codes enforced the physical separation of uses and of people.

Thankfully, this division is no longer the case in 21st-century America. Today, we are beginning to realize that mixed-use centers have far higher land values than single-use zones, whether residential or commercial, urban or suburban. Communities are trying to correct past missteps in land use regulation, using techniques such as overlay zones that are sensitive to context and raise the quality of design. 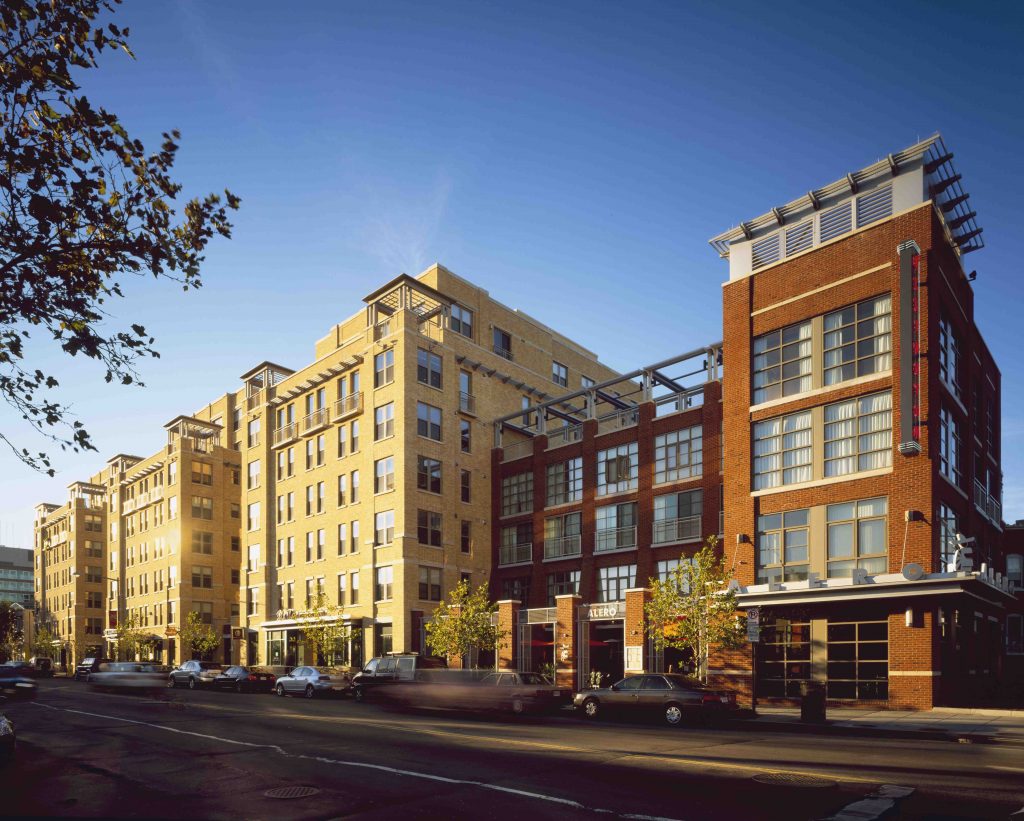 Building design in Washington, DC is based on heights and setbacks from the Pierre Charles L’Enfant 1791 designed plan of the Federal City with modifications by the McMillan Commission plan in 1902. The Ellington at 13th Street and U Street NW was built within these standards along two streets with varying heights.

The new Bethesda Downtown Sector Plan has proposed the use of an overlay zone to help improve the quality of the downtown. Through the use of density transfers, some properties will be eligible for additional density while others will get incentives to remain at a smaller scale or to forego development entirely. The additional density acquired by developers in the growth areas will help provide more affordable housing units and add to the quantity and quality of parks and public open spaces.An overall cap on development within the plan area will establish how much can be built during the life of the master plan. Instead of setting a maximum floor area ratio (FAR) for each property, maximum heights and design guidelines will govern on how much can be built on individual parcels of land. The intent is to promote a vision based on aesthetics for the entire community rather than rectangular building envelopes.

By allowing some building sites to acquire density from other sites within Bethesda (density transfers), it is anticipated that the character of places such as Woodmont Triangle can be maintained over time. New buildings in these areas will be required to create strong “bases” that are a similar height to saved buildings with additional height required to step back from the base.

Some residents and property owners are hesitant about embracing an approach that avoids assigning maximum FAR, the conventional measure of permitted density, to each property as part of the master plan. Residents are apprehensive that property owners will be encouraged to pursue projects that pack their property with massive buildings. However, this would not be allowed under the Guidelines. Some other property owners are worried that regulators will reject projects based on subjective judgments about what constitutes good design.

While these concerns are valid, they overlook the shortcomings of more traditional approaches to allocating development capacity and regulating what can be built. No master plan can hope to establish the “correct” FAR for every property in its boundaries, because FAR is at best an extremely imprecise measurement of development intensity. At worse, the FAR specified in a master plan or on a zoning map sets the expectation that any project that uses less than the maximum should be approved and that any building exceeding the maximum is unacceptable. The overlay zone’s emphasis on height and design rather than density – while retaining a cap on total development — will focus regulatory review on how buildings relate to each other and to the pedestrian realm. This is the line of questioning that will set us on a course to better communities in Bethesda and beyond.

The ultimate goal of this Bethesda Master Plan overlay is to create the best public realm possible through an emphasis on height and design.

This blog will illuminate many ways of creating extraordinary, well planned communities without losing the neighborhood elements of landscape and open space that we all cherish. We hope to stimulate creative insight, constructive thought and meaningful feedback. Stay in touch with The Third Place!