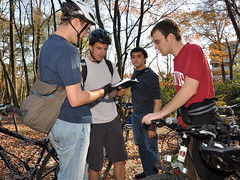 2009 bike tour of Greenbelt. Photo by M.V. Jantzen on Flickr.

When it comes to the built environment, the Washington region has long been one of the proving grounds for Planning.

From the first-ever National Planning Conference in 1909 to the demonstration of New Urbanism at Kentlands, Washington has benefited from planning ideas that often seemed far-fetched at the time.

Greenbelt, Maryland is no exception. It’s the best-preserved example of New Deal-era utopian town planning in the United States, and has been named a National Planning Landmark. This Saturday, I’m leading a bike tour of the community (details below). I hope you can make it.

About Greenbelt:
Faced with housing shortages, a decimated economy, and deteriorating conditions in cities, the Roosevelt Administration, as a part of the New Deal, set out to build 4 “greenbelt towns” as an example of how suburban development could and should move forward.

Partially inspired by England’s garden city movement, Greenbelt was intended to be a self-contained community surrounded by a green belt of parks, forests, and farms. Today, Greenbelt is not as isolated, but the historic center maintains its park-like setting.

Planning of the town was holistic, in keeping with the principles of the New Deal. In addition to housing, a commercial center was constructed. Civic buildings included an elementary school/community center and recreational buildings.

Perhaps most unique in the design was that residential buildings were turned “inside-out”. Residential structures have their main entrances on the “garden side.” The design of the community meant that pedestrian paths wound through superblocks, where buildings were turned inward toward parks, gardens, and social interaction. At the rear of the units is the street, the so-called “service side.”

Much of the architecture in the community is based on the International style with Art Deco elements. Some elements which are now becoming more common in urban design have been present in Greenbelt for over 7 decades. One example is the “shopping court” at the Roosevelt Center, where shops front on a pedestrian plaza, and parking is in the rear.

Greenbelt was designed with the automobile in mind, but it was not designed for the automobile. I think this is the largest and most crucial difference between Greenbelt and the prototypical post-war suburb. The community is walkable, traffic is calm, and despite being surrounded by sprawl, cars do not dominate the landscape.

The greenbelt towns were intended to be prototypes for suburban development. But the experiment didn’t become typical of suburbia. It did, however, help to inspire several planned communities, including Reston in Virginia, and Columbia and Montgomery Village in Maryland.

The Tour:
This Saturday, October 2, I’ll be leading a bike tour of the community. The tour will be approximately 4 miles in length and will include a tour of the Greenbelt Museum. It will cost $5.

The tour will begin and end at the Greenbelt Metro station. It starts at 1pm and will be complete by 5pm.

If you’re interested in attending or have questions, please email me at mcjohnson@ggwash.org.