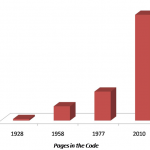 Growth in pages of zoning code over time.

Recently, I discussed the effort underway in Montgomery County to rewrite an aging zoning code. Over three decades, the code has grown unwieldy and hard to use. Thirty-three years of additions and amendments has left the code with a mess of outdated provisions, orphaned words, and a baffling table of permitted uses.

Many of the problems with the code stem from shortsightedness and the simple march of time. Text amendments and new zones were added without regard to the goals and intent of the code. As older zones fell into disuse, they were not refined or removed. At the same time, planners devised new zones for many of the master plans.

Among the most well-known aspects of any zoning code is the large array of zones themselves. In 1977, the county had 41 zones. Today, we have 120 zones, including 15 overlay zones.

At least 12 zones are totally unused, including six Planned Development zones which may never have been used. Some zones are similar to other zones, and thus are barely used.

Furthermore, the creation of mainly single-use, special-purpose zones has contributed to the proliferation. The H-M zone, for instance, was created for hotels and motels. But hotels and motels are permitted by right in 10 other zones. In fact, only two of Montgomery County’s hotels are even in the H-M zone. That zone takes up just 21 acres, well under 0.1 percent of the county’s land area. 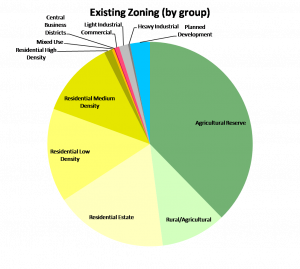 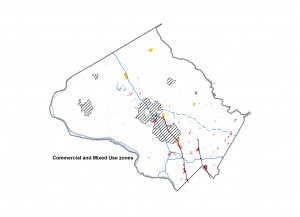 Several zones are almost identical in composition. R-150 and R-200 are both low density residential zones, and have very little differences between them. While R-200 makes up 13% of the county’s area, R-150 makes up only 0.4%.

Simplifying our zones is one step we are working on to make the code easier to use. In a future installment, I’ll talk about our thoughts on zones. It is clear that development in the county will increasingly be located in infill situations where the current standards may prevent good infill development. The new zoning code will help create building and land typologies that will result in predictable infill development.