The following list shows you not only our meetings, but also events we are attending in the community. In addition to coming to outreach events, you can schedule a time to meet with staff in our offices in Silver Spring, in Bethesda, or at your own group’s meeting. To schedule a time, contact us! You can also host an event, such as a happy hour or reception, for conversation about your interests or concerns. We will be pleased to attend. We will regularly update the following list to let you know with whom we’ve been meeting. Public Meetings/Events are in bold and are hosted by the Montgomery County Planning Department.

Meetings and Events – In Detail

with the Coalition for Smarter Growth

The invitation from the Coalition for Smarter Growth says: “Explore key opportunities for change, including new transit connections, needed pedestrian and bike improvements, new approaches to open space, and innovative ways to address housing demand and affordability. We’ll also talk about how smart growth design principles can transform not only a building, but the surrounding neighborhood as well. Our tours are active, so please wear sturdy shoes and sunscreen, and bring a water bottle!”

Use this link: smarter growth to find out more about this tour.

Stop by to find out more about the Bethesda Downtown Plan! We will be somewhere in the midst of artisan cheeses, organic produce, homemade Turkish food and gluten free desserts! Come chat with Elza Hisel-McCoy , Rachel Newhouse (Parks Department), and Lisa Tate on the 20th. The market is in the parking lot of the Bethesda Elementary School. More informatin here: bethesda-central. 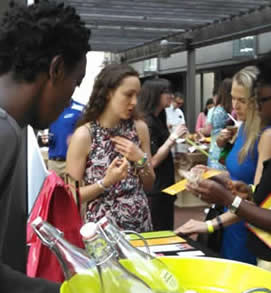 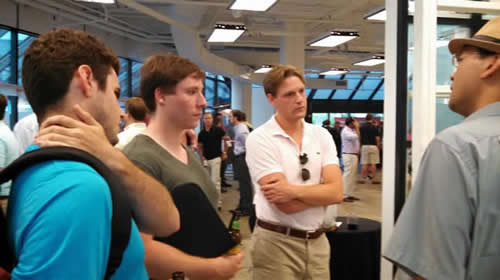 The “Untapped Perspectives” Happy Hour last night hosted by Streetsense was a great success. The final count of the number of guests is not in yet. We do know that this event, targetted specifically for those of you who are millennials, garnered over 500 RSVP’s. As we have reported, over 40% of you who live in Downtown Bethesda and many who work here, are millenials. We had the great pleasure of speaking with many of you last night.

If you were there, you may have been approached by roaming Streetsense staff armed with ipads asking a variety of questions about your interests and preferences. We hope that each of you were also invited to become part of a public “Feedback Loop” for the Bethesda Downtown Plan by Bethesda Planners who were also circulating. We want to make sure that we are casting a wide net and hearing from a variety of perspectives. The Feedback Loop will be useful in our hearing your thoughts on the preliminary plan recommendations that are scheduled to be completed in the late fall. Everyone on our e-newsletter list will have the opportunity to participate.

Bethesda Planners brought the draft Framework Plan that is underway and were busy all night answering questions and listening to guests. IN addition, Streetsense will be sharing with us what they learned at the range of engaging stations and activities they set up to gather insights. Watch for more in the coming weeks.

Thank you to hosts Streetsense, JBG and Clark Construction. If you would like to host an event, please contact Margaret K. Rifkin, AICP, RLA, 301 495 4583; BethesdaDowntownPlan@MontgomeryPlanning.org. 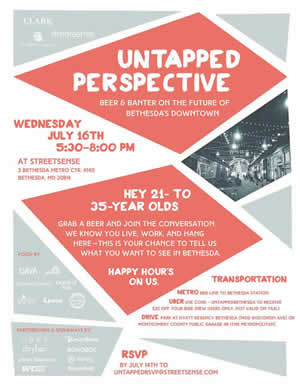 See the Presentation to the Planning Board on June 26

View the full presentation (pdf, 12MB) from the briefing given by the Bethesda Downtown Plan team to the Planning Board on June 26 on the progress of the plan. 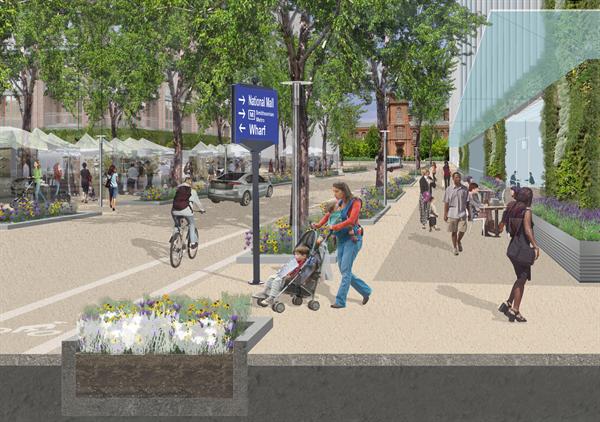 This Southwest Washington DC Ecodistrict image is courtesy of the National Capital Planning Commission. The image is by ZGF Architects. 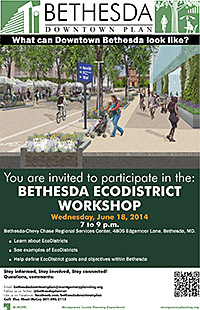 The Montgomery County Planning Department held a community workshop on the EcoDistrict concept for the Bethesda Downtown Plan on Wednesday, June 18th at the Bethesda/Chevy Chase Regional Services Center.

The workshop introduced the concepts and principles of an EcoDistrict, with examples from across the country.  Participants helped define goals and objectives and set priorities for incorporation into the Bethesda Downtown Plan.

New – View the presentation from the Ecodistrict Community Workshop from ZGF Architect and EcoDistrict expert Otto Condon –EcoDistricts: A Primer

New – Last night’s Bethesda Downtown Plan EcoDistrict Workshop brought out more than 45 members of the community to learn about concepts, examples, and the development of goals and strategies for possible EcoDistricts in Downtown Bethesda. See the presentation from Environmental Planner, Tina Schneider. Learn more and check back for the audio . We will post it soon..

Video Recap from May 17 Workshop

Check out this video which gives a recap from residents and planners from the May 17 Design and Planning Workshop where the Framework Concept Plan was presented.

Do you ever wonder exactly what happens after all your drawings and notes are rolled up after the workshop? This photo is of the team in house debriefing in our auditorium on the Monday morning after the Saturday May 17th Workshop. Planners took turns presenting the work from your groups. Notes you wrote on drawings are typed up and photos of each trace overlay are taken. This information is shared with the entire Bethesda Downtown Plan team and will be made available for your viewing as well. 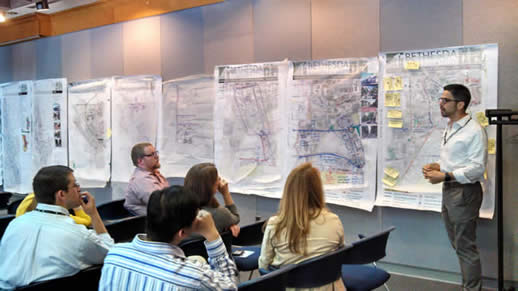 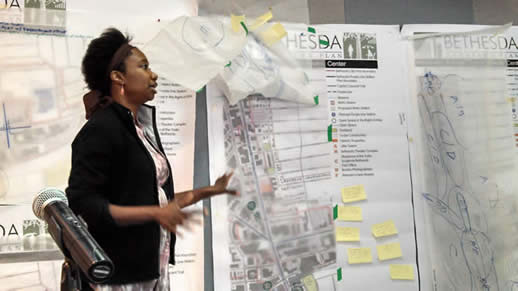 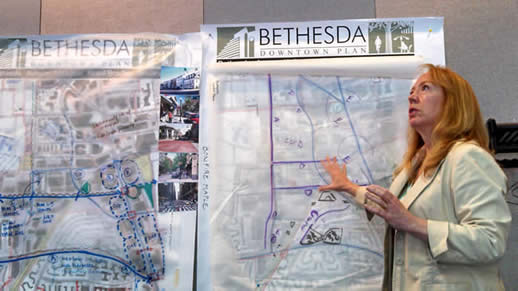 Facilitator Rachel Newhouse, Planner Coordinator from the Parks Department, presents the character selections of the ‘London Plane’ group. To her left on the wall are the photographs used from the Visual Preferences Survey, to represent different types of character resulting from different levels of intensity of use. 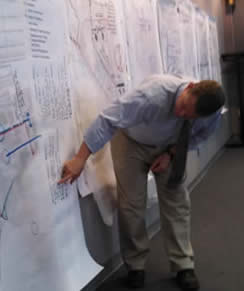 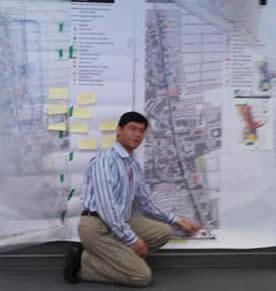 Division Chief Robert Kronenberg reads from notes provided by the ‘Sawtooth Oak’ group concerning the Wisconsin Avenue Corridor. Marc DeCampo, Supervisor then follows with the work from the ‘Bloodgood’ group.

Thank you for coming and talking with us about the Bethesda Downtown Plan at Caddie’s last Thursday. Stay tuned for our next appearance at a Happy Hour..be watching for one in June. Please also consider inviting us to yours… 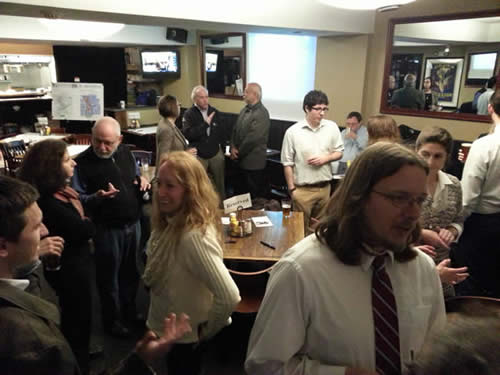 Three short 20X20 (20 slides 20 seconds each) presentations included one by Doug Firstenberg of Stonebridge Carras about Bethesda, one by Marc DeOcampo, a Bethesda Planner, about encouraging people to “Make Your Mark” on Bethesda, and one by volunteer urban designer JC Alaya with creative ideas for improving downtown Silver Spring. People mingled and had animated one on one conversations. Many wrote comments on paper covered tables, & exchanged contact information. Some received advice from seasoned professionals about how to effect change. People who came included condo owners from the Battery Lane neighborhood, a professional planner from one of the Institutes at NIH, a transportation activist from the Bradley Boulevard neighborhood as well as other young professionals from the sponsoring groups. 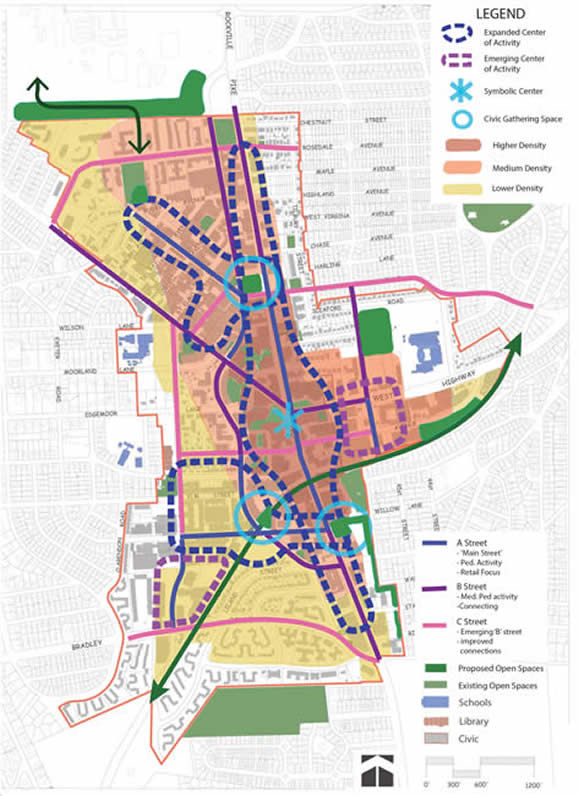 On Saturday we hosted a second workshop for the Bethesda Downtown Plan at Bethesda-Chevy Chase High School. We presented a draft framework concept for the plan based on feedback from numerous community meetings and discussions held since last fall.

Description of the Draft Framework Concept

The concept, above, shows several areas as “Expanded Centers of Activity” and two as Emerging Centers of Activity. These designations were informed by the community work at the March 1 Workshop. A “Symbolic Center” is shown at the Metro Station which acknowledges the fact that while the area is not a retail destination and center of a variety of activities, it is indeed a “Symbolic Center” and a transit destination. Blue circles show where lively, enhanced “Civic Gathering Space” can be in the future.The framework concept also shows other existing and proposed open spaces.

The big areas of color that range from light to dark in tones of gold and orange, represent levels of density ranging from lower to higher. Many areas along the edge of the Downtown are left without any color overlay since they are low density transition areas.

The draft framework concept shows three types of streets based on pedestrian use:

This was followed by a break-out session where participants worked in groups to focus on specific areas and provide comments on the framework concept. The group shown here is looking at the Wisconsin Avenue Corridor and using images from the Visual Preference Survey, is identifying what scale they believe is appropriate in varous areas. You can see the blue bubbles they are drawing on the plan and the photos, A,B,C,D and E, showing streets lined with buildings, each image representing a different scale. 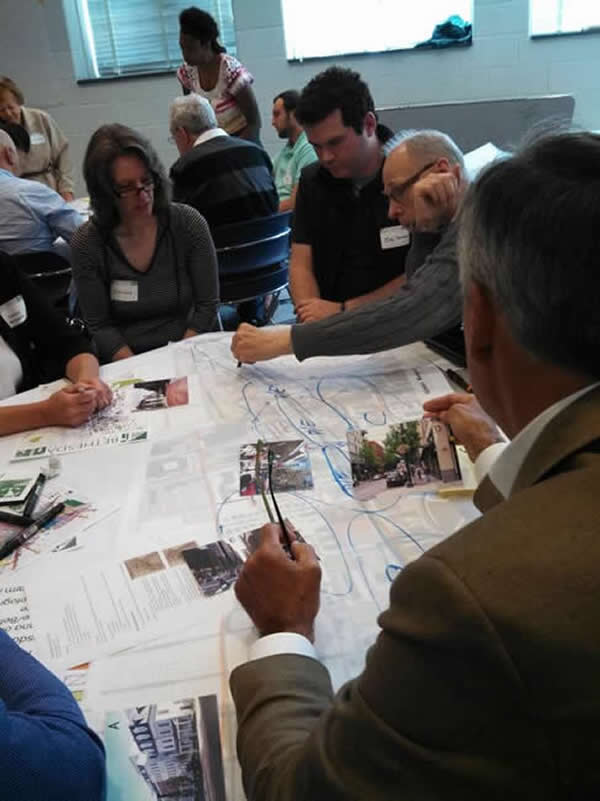 Many of you came to find out about the planning process and see our work so far.

We are still in the middle of the planning process. The Draft Plan is scheduled to go to the Planning Board starting in Fall 2014. There is still time to weigh in. Last night, people asked questions and discussed their ideas and concerns with planners. Both newcomers and long-time participants attended: residents and development professionals. Representatives from the Woodmont Triangle Action Group and the Arts and Entertainment District Board were there as well.

The Boards we presented can be downloaded here: 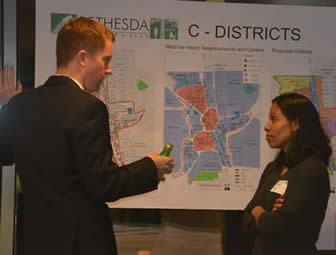 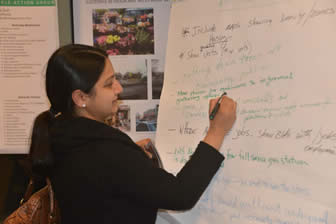 A first time participant who is a member of the community (and an urban planner) adds her comments to a growing list.

There were several questions displayed on posters. People could respond with colored dots. The questions were: 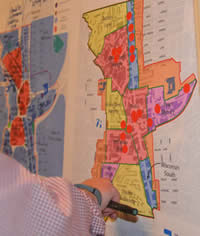 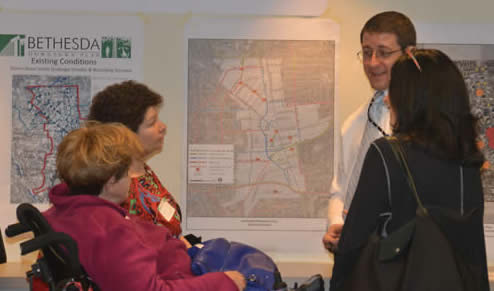 A discussion about crosswalks with Matt Folden, the planning team’s expert on transportation.

Well known local blog, BethesdaNow, reported on our March 1st workshop noting the successful draw of 130 participants but questioned who was largely missing. “But mostly missing were millennials, the 20- to 34-year-olds who the Planning Department says make up 40 percent of the roughly 10,610 residents of the 450-acre downtown Bethesda area,” wrote Aaron Kraut. “Planners counted six of them at the March 1 meeting.” See the entire BethesdaNow article here. 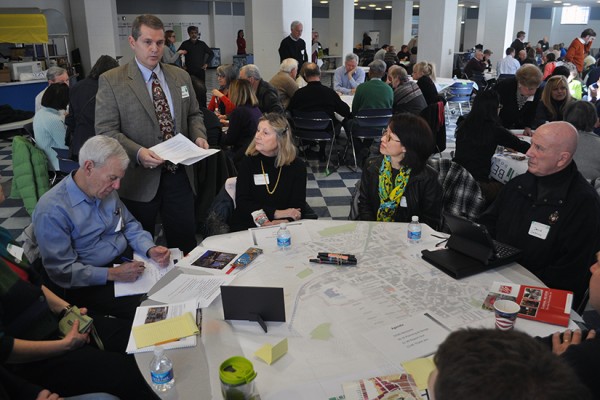 The March 1 workshop was well attended. Here, Robert Kronenberg of the Planning Department serves as the facilitator for a group. Residents, property owners and development professionals participated. Photo from BethesdaNow.

Over 130 people attended a workshop on the Bethesda Downtown Plan. Watch the short recap video below to find out what happened at this event hosted by the Montgomery Planning Department. Here are themaps and drawings used by the participants to answer four questions:

Their answers will help to inform the recommendations of the plan. There are also drawings prepared by each of fourteen small groups. They are being used to inform our work creating several big picture alternatives. Those alternatives will be provided for community discussion as a next step.